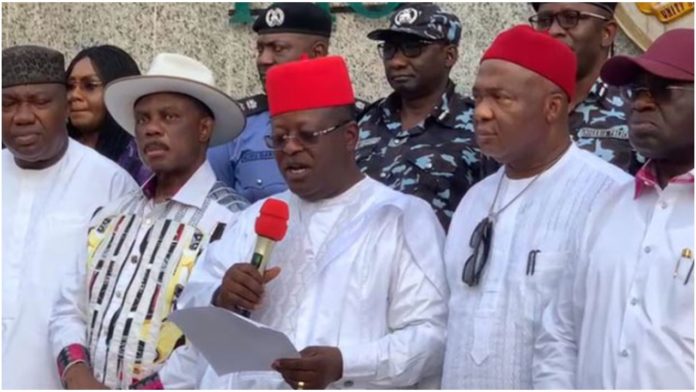 Governor of Ebonyi State, who is also the Chairman of South East Governors’ Forum, Engineer David Nweze Umahi says the newly launched Ebubeagu Security outfit has been deployed to quell pockets of disturbances in parts of the zone.

The Governor while stating that the Security outfit was already doing tremendously well in assisting other conventional security apparatus to combat kidnapping, banditry, and other forms of crimes in the zone, noted that Governors of the Zone would ensure adequate funding of the outfit to guarantee optimum productivity.

The Forum Chairman also appealed for assistance from the Federal Government to enable States to domesticate the fight against insecurity according to their peculiarities.

‘Security is number one before health and education because it is he who is alive that can talk about Education. We must commend Mr. President but we continue to request that whatever resources that are available at the center should be used to assist States because the States are currently going through all kinds of challenges’

Umahi assured that measures have been put in place to ensure that the Ebubeagu Security outfit would not be hijacked by politicians over time.

‘We have launched the formation of the Security, we already have security men and we are going to be expanding, we have deployed them and they are working and they are going to be effective, everyone has to operate within the confines of the law to ensure that it is not hijacked by politicians’

While commenting on the recent attack on the people of Ohaukwu, Governor Umahi warned leaders of the Country to desist from what he described as extreme politics in order not to plunge the nation into anarchy.

‘The Country is going into extreme politics because we have departed from the culture of hard work and we must go back to the drawing board, we have deployed security and we have deployed Ebubeagu there and we are going to make sure such attack does not happen again; we have identified the flashpoints and we are interfacing with the Nigeria Police Force to establish a buffer zone within the area’, he said.