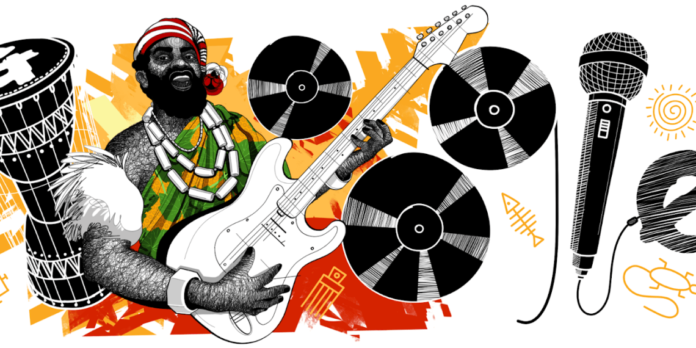 Nigerian guitarist and legendary highlife musician, Oliver De Coque, was yesterday honoured with Google Doodle on his 74th posthumous birthday. The illustration for the doodle was made by Lagos-based Ohab TBJ.

The artiste shared the image of his work via his Instagram handle as he stated that working on the project is a dream come true. He wrote in the caption section, ‘Ayyyyyeeeeeeeeeeeeee. Darling, I illustrated a @google Doodle. It’s a doodle to commemorate the late Oliver De Coque, a Nigerian guitarist and one of Africa’s prolific recording artist, on his birthday today.

‘OMG! This is one of my dream projects come true and I still can’t believe it!!! Today I’m literally googling everything before the day ends. AD shout out to @helenecleroux. Go Google everything today too darling! (It’s only live in Nigeria tho) Make sure to click on the Doodle to learn more about Chief Oliver De Coque.’

Born Oliver Sunday Akanite, he was one of Africa’s most prolific recording artists. Coque began to play music at 11. He was taught to play the guitar by Piccolo, a Congolese guitarist living in Nigeria.

He further served as an apprentice with juju stars Sunny Agaga and Jacob Oluwale; he was a star by his late teens. Attracting international attention with a London performance in 1973, he played on Prince Nico Mbarga’s album Sweet Mother four years later.

Since releasing his debut album Messiah Messiah in 1977, Coque recorded about 93 albums in his homeland. His dance-inspiring “Ogene” style of Nigerian high life, which blends modern high life and traditional Igbo music, has produced such hits as ‘People’s Club of Nigeria‘, ‘Nempi social club‘, ‘Biri Ka Mbiri,‘ ‘Ana Enwe,’ ‘Nnukwu Mmanwu,‘ and “Identity,” which remained on Radio Nigeria 2’s Top Ten throughout most of 1981.

How IPOB Can Get Nnamdi Kanu Released – VON DG, Okechukwu

Igbo Group Tasks Uzodinma To Brace Up Over Killings In Imo