How Uzodinma’s Staff Buses Got Ruined By Dilapidated Roads 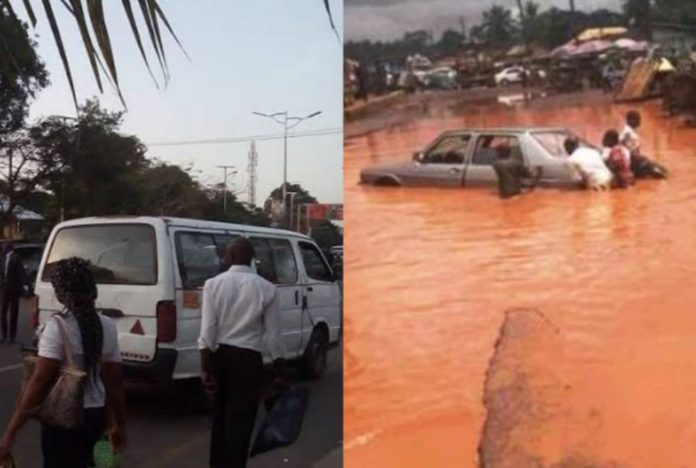 Seventy-two hours after the civil servant staff buses were commissioned in Imo State by Governor, Senator Hope Uzodinma and put into action, sources said that the vehicles have started developing problems due to the state of roads in Imo State.

It was learnt that the Buses have begun to spoil one after the other due to deplorable state of roads in Owerri and sister communities. A few days ago, one of the buses plying through Nekede road got trapped because of the collapsed road in the area. Civil servants inside the staff bus told Newsmen that they regretted boarding the bus, after some hours the vehicle was offloaded for the workers to join and push it out of danger spot.

Read Also: What Is Gov Uzodinma Waiting For Before He Starts Working?

Since that incident vehicle assigned for Nekede route have all withdrawn because of bad road. The worst now is World Bank Estate route, where the major road has completely turned to death trap and the drivers have refused to go through the major road to avoid being trapped. Vehicles assigned to carry workers living at World Bank Estate and Umuguma have been withdrawn because of bad road.

Vehicular owners and commuters in Imo State are groaning, following the dilapidated roads across the state, thereby frustrating all aspect of economic activities.

In the state capital, drivers have resorted to climbing of green and road verges, flowers and costly grasses meant to beautify the affected areas in search of better access to their respective destinations.

Within the state capital, roads leading to Port Harcourt and World Bank from Control Post/Assumpta Roundabout are death traps.

Despite their importance, these roads present a very sorry sight to see because the present Uzodinma led Government has not deemed it fit to do anything about them. Even though the past Ihedioha led Government started some ground scale rehabilitation on the road during the dry season, Governor Hope Uzodinma couldn’t carry on with the project till the raining seasons came and worsened the condition of the roads further.

In most communities across the three geo-political zones of the state, bad roads have snowballed into gully erosion and bridges are collapsing. The people are stuck and have continued to groan since they are compelled to spend more time and more money to convey their goods and services, using bad roads ever experienced apparently since after the creation of the state more than 40 years ago.

Imo State, created on February 3, 1976, has not had it so bad in history like now. A situation where sub-standard roads are executed by incompetent, quack/unskilled contractors is better imagined than seen and the silence of the present Governor, Senator Hope Uzodinma has only made it completely worse.

The resultant effect is that the poor roads have led to both economic hardship, loss of revenue/man-hours, prevention of human/vehicular movement, stress and anxiety. In fact, the list is endless.

It’s disheartening that the Eastern Heartland has been thrown into mourning because of bad roads, destruction of existing solid roads by the administration of Governor Hope Uzodinma under the guise of urban renewal and beautification.

At the MCC Road Owerri; he has destroyed access to people’s shops and residences in the name of constructing gutters and for four months, he has only been able to construct about 200 meters of gutters on one lane of the road. And this same government would commission revenue agencies such as ENTRACO, OCDA, IMSAA to go tax the same people that are not making sales due to bad roads.

A survey in Owerri, the state capital, shows that the once cleanest state capital in the country, is in ruins, with the shutdown of Douglas Road, unpassable Wetheral Road and gridlocked Tetlow/Royce Road.

Again, whenever it rains, the city will be so flooded than ever due to the destruction of well-planned drainage system by Sam Mbakwe regime.

There is no justification for the near-total collapse of major roads in the state for a government that came into power at the peak of the dry season and had all the time to arrest the deplorable roads. The greatest disservice the Uzodimma administration has done is to subject Imo people to the same harrowing experience they passed through the last rainy season.

Governor Hope Uzodinma has no excuse for allowing these roads to remain deplorable even when there was an ongoing remedial work on the roads in January when he came into power and besides that, there is nothing to excite about the Memorandum of Understanding the government signed with Julius Berger on the two roads. The only thing that can pacify Imo people is seeing the roads tarred and not paper works.

Something has to be done to address this urgently by the state government.