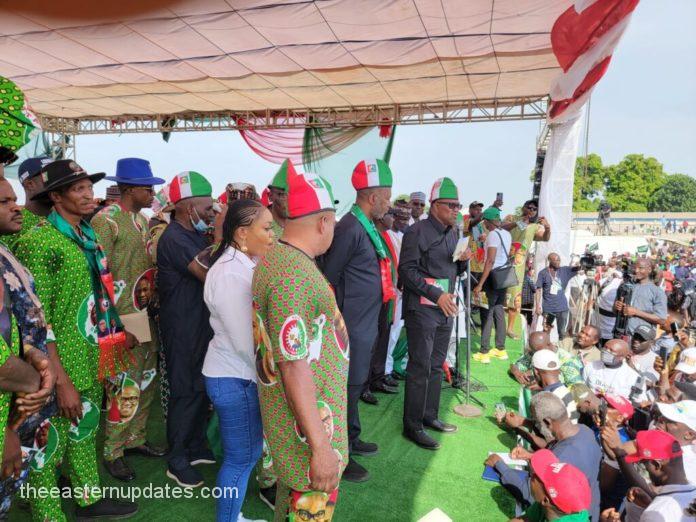 Mr. Peter Obi on Saturday flagged off his presidential campaign in Nasarawa as his supporters trooped in their numbers to support the standard bearers of the party.

Flagging off the campaign at the Science School field in Lafia, the Nasarawa State capital, the LP presidential candidate, Peter Obi, and his running mate, Yusuf Datti Baba-Ahmed, urged the people of Nasarawa State to vote for competency in the forthcoming election.

Obi said his administration would run an inclusive government towards carrying the women and youth along, adding that the youths would be his landmark of success because there would be job opportunities.

‘Don’t vote for those that stole our money, they will come and give you money, collect the money and vote your conscience because the money is your money.’

He further said his leadership would deal with insecurity and provide adequate infrastructure that would develop every state in Nigeria, especially Nasarawa State.

‘Me and my running mate are strong and energetic, we are young to deliver Nigeria from the shackles of poverty and corruption, we are strong mentally, physically, and very intelligent. We know the way to deal with insecurity, just give us your votes,’ he added.

In agriculture, he said his administration would provide fertilizer for free to all farmers in Nasarawa while praying for those that lost their lives and farmland as a result of flood in the state that God would provide for them.

‘We know that Nasarawa people are farmers, we will provide faterlizer free of charged for farmers towards sufficient food production in the state’.

He assured that the Labour Party would strengthened the provision and usage of ICT towards creating job for the youths while urging Nasarawa people to vote massively for them as they are the best candidates for the job.

He also lamented the inability of Nigeria Super Eagles not qualifying for the World Cup saying it was a shame, stressing that LP would restore the love Nigerians have for sports if voted into power.

Also speaking, Yusuf Datti-Baba Ahmed stated that LP is the right choice for Nigeria as the party is set to restore the lost glory of Nigeria.

He further said he would work with the presidential candidate to improve the economy of Nigeria, via a robust economic plan and provides infrastructure and basic amenities in the country.