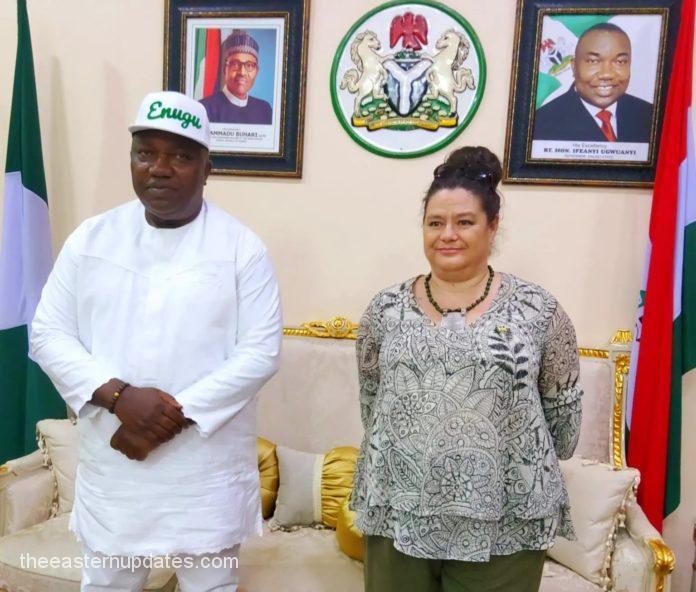 Mrs. Emmanuelle Blatmann who is the Ambassador of France in Nigeria has reportedly acknowledged the huge potentials which can be found in Enugu State, especially in agriculture and some other resources that guarantee food and security.

Mrs. Blatmann had made this statement when she had paid a courtesy visit to Governor Ifeanyi Ugwuanyi of Enugu State at the Government House, Enugu, yesterday.

The French Ambassador had been in Enugu on a visit to the Enugu State University of Science and Technology (ESUT) and the Alliance Française, as well as some of the groundbreaking ceremony of the medicinal plant processing facility, among other official engagements.

The project has been described as a direct partnership between a French company, Cailleau Herboristerie and a Nigerian company, Priscilla Davis.

Similarly, it can be recalled that the Rwandan High Commissioner to Nigeria, Amb. Stanislas Kamanzi, had also ben at the Government House, Enugu, on a courtesy visit to Gov. Ugwuanyi.

The Rwandan High Commissioner who was accompanied to the Government House by a member of Board of Trustees (BOT) of Life In My City Art Festival (LIMCAF) Chief Loretta Aniagolu, Prince Victor Ogakwu, among others, was in Enugu for the grand finale of the 2022 LIMCAF competition.

Amb. Kamanzi expressed gratitude to Gov. Ugwuanyi for warmly receiving him in Enugu on his first visit.

The envoy appreciated Enugu’s hospitality and peaceful ambience, stressing that “the city is very hospitable.”

“I am very much honoured and humbled to meet you (Ugwuanyi) on my first visit to Enugu. This is an opportunity for us to expand the bond between Rwanda and Nigeria, particularly this state (Enugu).

“A place you will go as a diplomat and it becomes your home; so I always consider this place (Enugu) as my home and a friendly place with the Rwandans. I will be kind to take this message to my leaders.

“As we came, we were received with honour and the reception was so befitting. So, I conclude by once again thanking and assuring  you (Ugwuanyi), that we will convey the positive message of what we witnessed here,” the Rwandan Ambassador said.

He said that the visit was an opportunity to expand bilateral ties between Rwanda and Nigeria, particularly Enugu State, disclosing that it was a great pleasure for him to start engaging with the people of the state.