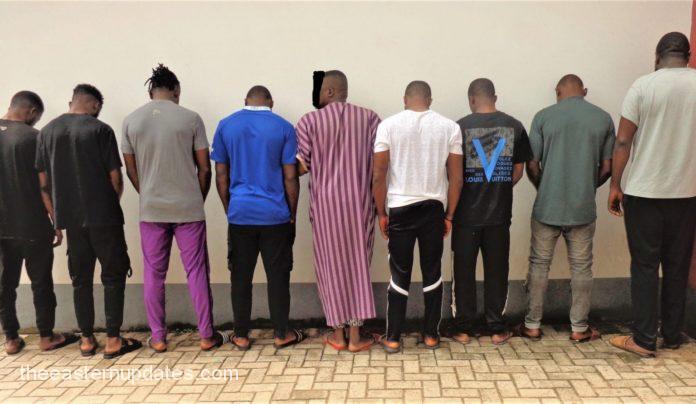 In a fresh raid, the Economic and Financial Crimes Commission (EFCC) has nabbed over nine suspected internet fraudsters in Enugu State in a sequel to their last bust.

The operation had also followed the one which had been conducted last week where nine males were equally apprehended.

A statement by EFCC Head of Media, Wilson Uwujaren said the latest raid was carried out after verified intelligence.

Five vehicles, 25 mobile phones of different brands and seven laptops were recovered from them.

Uwujaren added that the suspects will be charged to court after the completion of investigations.

In a related development, the Economic and Financial Crimes Commission (EFCC) has arrested nine suspected internet fraudsters in Enugu.

They had been reportedly arrested on Friday at the Transekulu and Monarch areas of the state and the EFCC Head of Media, Wilson Uwujaren, announced the raid in a statement.

The anti-graft agency said investigation showed that they impersonated foreigners to defraud their victims.Two vehicles, 26 mobile phones and six laptops were recovered at the time of arrest.