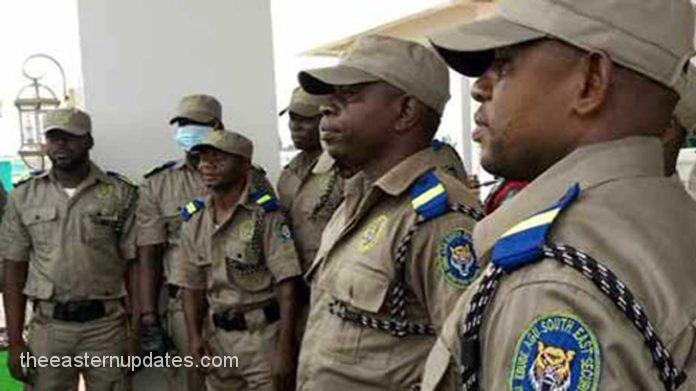 A source who spoke to reporters on Wednesday over the matter disclosed that the militia came into the community and attempted to abduct the chairman of Oba Youth Association.

It was gathered that the youth chairman, whose name was not immediately ascertained, resisted them, causing them to shoot at him severally.

‘He called Oba people, who came and captured Ebube Agu people, beat them blue-black, destroyed their motor, and took them to the Palace.’

The source said the town is afraid because Ebubeagu has an antecedent of always returning to attack communities where they are humiliated.

The source said the youths are being careful with circulating videos made of the attack on the Ebubeagu operatives, because it captured the faces of the youths.

Meanwhile, a youth from the area, who gave his name as Igwe Chinonso, told our correspondent that the operatives were men of the Anambra Vigilance Group (AVG).

A video of the attack which was obtained by The Eastern Updates also showed the damaged vehicles as bearing the inscription AVG.

Chinonso said: ‘You know all those areas that have borders with Imo State, they refer to every government-sponsored security group as Ebubeagu.’

Anambra State Police command’s spokesperson, DSP Toochukwu Ikenga, has, however, set the record straight about the attack on the security men.

Ikenga said: ‘It was just a misunderstanding between vigilante operatives and Oba youths, who felt that the vigilante men attacked their chairman.

‘As I speak to you, the DPO of that area is there, and he is making sure that there is peace and order. We have been able to calm the situation down,’ he said.

The Eastern Updates reports there have been several allegations levelled against the regional security outfit.