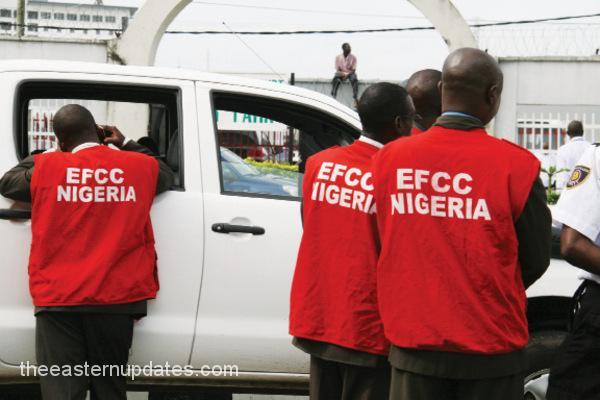 No fewer than thirteen (13) local government Chairmen in Ebonyi State who are under probe by the Economic and Financial Crimes Commission (EFCC) over alleged road contract estimated at ₦2bn.

Documents which were sighted by The Eastern Updates indicated that the anti-graft agency had invited the chairmen following a petition that the amount meant for road projects was allegedly mismanaged by the chairmen and some key aides of the State Governor.

A letter of invitation dated July 6, 2022, and signed by the Commission’s Director of Operations, ACE I Abdulkarim Chukkol, was extended to all the Executive Chairmen, through the State’s Local Government Service Commission, LGSC, to appear at the anti-graft national headquarters in Abuja on separate dates from July 15, 2022, to August 11, 2022.

The anti-graft body’s ‘Letter of Invitation,’ addressed to the Chairman, Ebonyi State Local Government Service Commission, Abakaliki, Ebonyi State, a copy of which was made available to our Correspondent reads: “This commission is investigating a complaint in which they need to seek certain clarification from your Local Government Chairmen.

“In view of the above, you are kindly requested to inform and release the under listed Local Government Chairmen to report for an interview with the undersigned through the Head, CMU. 1 as scheduled below at EFCC Headquarters 5th Floor Plot 301/302 Institutions and Research District, Jabi, Abuja by 1000 hours.”

The forwarding letter, dated 22 July, 2022 and titled; RE: INVESTIGATION ACTIVITIES, read, “I am directed to refer to the letter with Ref. No. CR: 3000/ABJ/HQ/CMU 1/ST/DU/VOL.4/343 of 6th July, 2022 by EFCC on above subject as attached and to respectfully inform you that your presence is needed at the EFCC Headquarters, 5th Floor, Plot 301/302 Institution and Research District, Jabi, Abuja at 1000 hours. (See attached schedule).

“Please, take note of the urgent nature of the invitation letter and act accordingly for the invitation came to us today being 22nd day of July, 2022 and received by the Local Government Service Commission.

“Suffice to say that you make frantic efforts to honour the invitation and find attached for your guidance while noting paragraph three for its emphasis.”

The letter specified the dates on which each of the Council Chairmen is expected to be quizzed and they are said to have gone to Abuja to say what they know about the issues at stake.

The invitation also stated that the concerned Chairmen “are to come along with Certified True Copies of all documents, approvals and payments made for One Kilometer Road construction in their Local Government Areas in 2019. This request is made in pursuant to Section 38 (1) & (2) of the Economic and Financial Crimes Commission (Establishment) Act, 2004.”

A Source close to the Ebonyi state government who spoke on an account of anonymity has however   alleged that  the council Chairmen in the state were buying time by going into hiding because  their tenure would  soon come to an end.

Meanwhile, a Federal High Court sitting in Abakaliki has nullified the recent Local Government election in the state making the matter worst for the Local government chairmen in Ebonyi state.