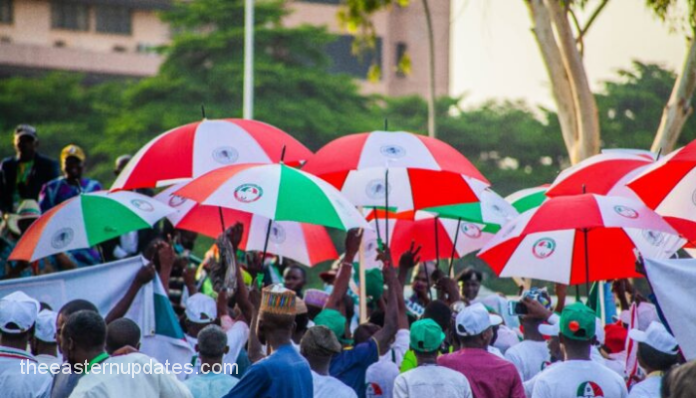 Things are not looking up for the PDP family in Ebonyi state as a Federal High Court in Abakaliki has once again declared the results of their already rescheduled People Democratic Party’s (PDP) primaries in Ebonyi which produced had Sen. Obinna Ogba invalid while blotting it out completely.

The Presiding Judge, Justice Fatun Riman had also recognised Dr Ifeanyi-Chukwuma Odii as authentic Gubernatorial Candidate of the party for the 2023 polls while reiterating that the repeated primaries in the state were invalid because it was not monitored by the Independent National Electoral Commission (INEC).

“The rescheduled primaries were not done in line with the law.

“We, therefore, recognise the primaries of May 28 and 29 that elected Odii as governorship candidate in Ebonyi and that is our judgment.

The Eastern Updates recalls that the party rescheduled and conducted fresh primaries on June 4 and 5, which had also produced Sen. Obinna Ogba as the gubernatorial candidate for the party. The party had thus chosen to disregard the outcome of the May 28 and 29 primaries.

An Appeal Court in Abuja had earlier on Tuesday ordered for a fresh trial of the suit by the Federal High Court, Abakaliki. The order was made to enable the appellant to be heard, pursuant to the principle of natural justice.

The Counsel for Odii, Mr Mudi Erhenede (a.k.a Anyichuks), thanked the court for the judgement.

“The court has revisited the suit for fair hearing and ruled that the rescheduled PDP primaries remain invalid.

In another report, the former Imo State governor, Emeka Ihedioha has on Monday openly congratulated Ademola Adeleke and the Peoples Democratic Party (PDP) over the wonderful victory which had been scored by Senator Ademola Adeleke in Saturday’s gubernatorial election in Osun State.

The PDP candidate had won the election with a total of 403, 371 votes to defeat the incumbent Governor, Adegboyega Oyetola, who scored 375, 027 votes.

In his reaction, Ihedioha had also urged Adeleke to immediately focus on taking the necessary steps as he prepares to run a government that will satisfy the huge expectations of the people of Osun State.