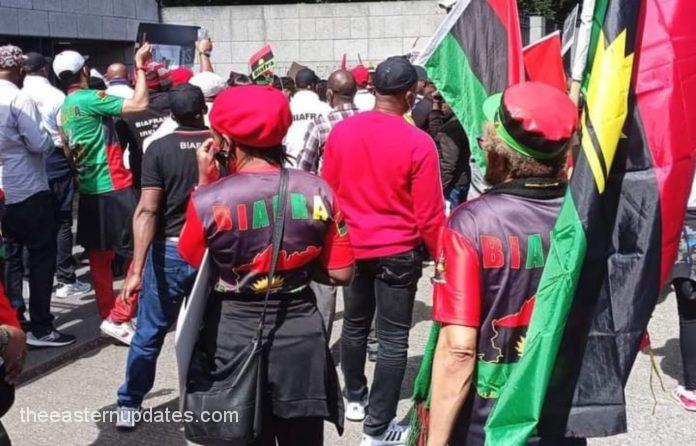 While sentiments has kept pouring in over the malicious incident, the Indigenous People of Biafra, IPOB, has openly come out to criticise the Ebubeagu security outfit for killing seven wedding guests in Imo State.

IPOB had also described Ebubeagu as an imported terrorist group which had been brought in to unleash maximum terror on the people of the Southeast.

Emma Powerful, the spokesman of IPOB had also accused the Imo State Governor, Hope Uzodinma, of importing the terrorists such as Ebubeagu to kill people of the state.

In a statement he signed, Powerful said most of the massacres perpetrated in the Southeast are aimed at demonizing IPOB.

According to Powerful: “We, the global family and movement of the Indigenous People of Biafra (IPOB), under the command and leadership of our great leader, Mazi Nnamdi KANU, condemn in unequivocal terms the atrocities happening in Imo State. All these atrocities are perpetrated by Hope Uzodinma’s political thugs, which he created to attack his political opponents and demonize IPOB.

“IPOB realized and understood that Supreme Court Administrator of Imo State, Hope Uzodinma, was sent by those who magically made him a governor from the fourth position to the first position after the election to depopulate Imo Youths.

“Continuous killings in Orlu, and Oru East/West LGAs of Imo state by Hope Uzodinma’s militias is disturbing. Hope started by bringing in Nigeria Army into Orlu LGA, creating pandemonium and tension in Imo State before creating Ebubeagu to solidify his wicked actions against his people. He started and renewed the kidnapping and slaughtering of Imo State citizens.”

Recently, it has also been revealed that while reacting to some reports which had been made against the group for sponsoring the outlawed ESN group, the Indigenous People of Biafra, IPOB, has openly come out to warn the people of the Southeast against making donations of funds to criminals who have been masquerading as operatives of the Eastern Security Network, ESN.

The IPOB group had also explained that it never appointed anybody to solicit funds for ESN.

Emma Powerful, the spokesman of IPOB, said those donating may ignorantly be funding criminal activities in the Southeast.