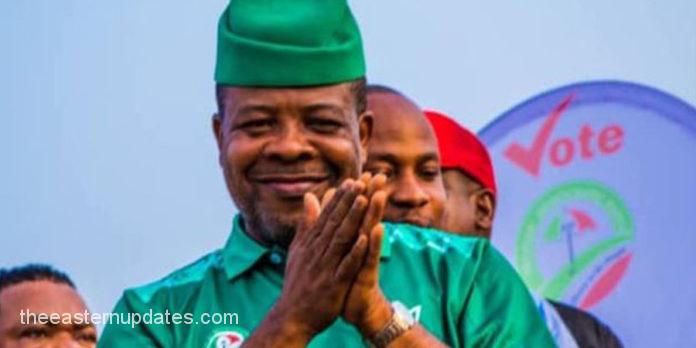 As mixed reactions continue to pour in for the Osun State Governorship results, former Imo State governor, Emeka Ihedioha has on Monday openly congratulated Ademola Adeleke and the Peoples Democratic Party (PDP) over the wonderful victory which had been scored by Senator Ademola Adeleke in Saturday’s gubernatorial election in Osun State.

The PDP candidate had won the election with a total of 403, 371 votes to defeat the incumbent Governor, Adegboyega Oyetola, who scored 375, 027 votes.

In his reaction, Ihedioha had also urged Adeleke to immediately focus on taking the necessary steps as he prepares to run a government that will satisfy the huge expectations of the people of Osun State.

He. made the remarks in a statement he personally signed and released to newsmen.

The statement reads, ” My dear brother, I followed with studious interest, your well-deserved victory in the Osun State governorship election on Saturday, July 16, 2022.

“Your emergence as the Governor-Elect is, no doubt, a confirmation of the people’s confidence in your leadership capabilities and a proof of the unbreakable bond of friendship and solidarity between you and them. That is the hallmark of leadership.

“You are, indeed, a man of history and destiny. Your remarkable victory which culminated in the defeat of an incumbent, bears eloquent testimony to the open secret that you were robbed of victory four years ago, when you first contested the governorship election.

“It is also a proof of your sterling attributes – hard work, political sagacity, perseverance and tenacity. The fact that you are imbued with these traits and yet remain humble is what makes you a consummate politician and leader of the people, whose cause you champion unreservedly.

“I also congratulate our great party, the Peoples Democratic Party, PDP, and the good people of Osun State whose steadfastness, courage and vigilance made this sweet victory possible.

“The quest by the Independent National Electoral Commission, INEC, to reinvent itself and ensure that the sanctity of the WILL of the people, expressed through the ballot box remains an article of faith is quite commendable.

“The determination by the electoral umpire to ensure that votes not only count but is the sole basis for determining the outcome of elections has further boosted the confidence of Nigerians in our Democracy.

Given the misgovernance that has persisted in your State, I urge you to immediately focus on taking the necessary steps as you prepare to run a government that will satisfy the huge expectations of the people of Osun State.”