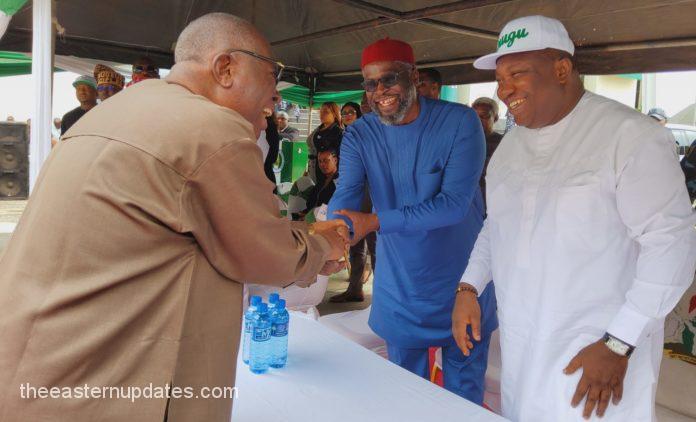 While declaring their full support for the Governor, the people of Uzo-Uwani Local Government Area of Enugu State have reassured the Enugu State Governor, Ifeanyi Ugwuanyi of their unflinching support, loyalty and solidarity towards his senatorial bid come 2023 general elections while stressing that the governor is their indisputable leader in whom they are well pleased.

Uzo-Uwani people, who had been led by their political leaders, traditional rulers and elder statesmen such as Chief Maxi Ukuta and Chief Dr. Michael Ajogwu, SAN, on a Thank-you visit to Gov. Ugwuanyi at the Government House, Enugu, on Friday, had also reiterated that their total support and loyalty to the Enugu State governor were in recognition of his unprecedented interventions in their council area in terms of massive infrastructural development and human empowerment, after decades of neglect.

The elated people, who disclosed that Uzo-Uwani LGA has seen light under Gov. Ugwuanyi’s administration, stated that no past government had remembered the council area, until the present state government stepped in and changed the narrative.

The people reaffirmed their commitment and faith in the Peoples Democratic Party (PDP), and assured the governor that the PDP remains their party come 2023 general elections.

Speaking, the Chairman of Uzo-Uwani LGA, Hon. Chukwudi Nnadozie, told Gov. Ugwuanyi that they came to thank him for the good works of his administration in Enugu State and particularly, in their council area.

Hon. Nnadozie, who pointed out that “since 1998 the PDP was formed, Uzo-Uwani LGA has never and will never go to another political party”, also told the governor that “come 2023 it will not be different because we are not serving the PDP in vain”.

Enumerating the numerous achievements of Gov. Ugwuanyi’s administration in Uzo-Uwani LGA, such as massive road projects, health and education facilities, political appointments and security, in spite of the nation’s economic challenges, the Council Chairman maintained:

“PDP has shown us love through you (Ugwuanyi). We have come to tell you that we are solidly behind you come 2023. We want to assure you that all the candidates of the PDP will be delivered 100 percent in Uzo-Uwani LGA”.