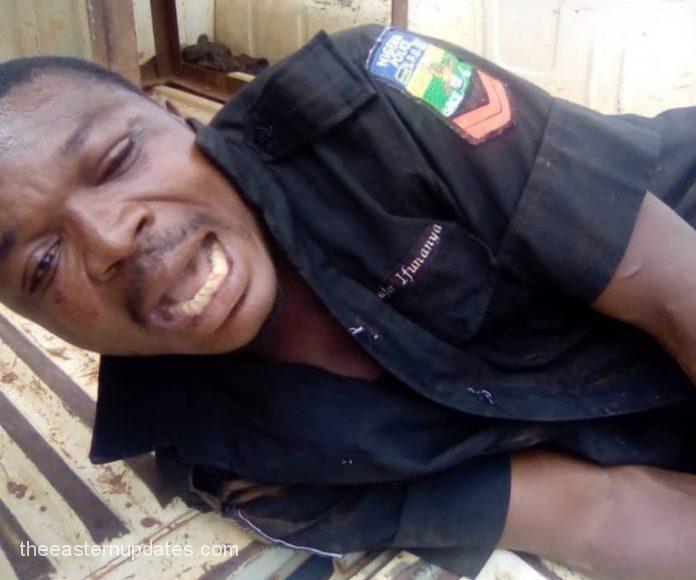 The Commissioner of Police of the Ebonyi State Command, CP Aliyu Garba has openly announced the arrest of a fake police officer, Enyi Friday who was detained after he parades himself as an officer and deceives some of the indigenes in the state.

The suspect has been identified to hail from Umunwagu Idembia community in Ezza South LGA of Ebonyi State and was arrested for impersonation.

Enyi was arrested by one Anyigor Lazarus, who is a Commander of Ebubeagu Security outfit in Ezza South LGA of Ebonyi State.

Enyi, who is not a police officer was caught wearing the uniform of a Police Corporal hence his arrest.

The commissioner, in a statement, signed and made available to journalists in Abakaliki, through the police public relations officer, PPRO, SP Chris Anyanwu said the suspect has been handed over to the State Investigation and Intelligence Department for further investigation.

He urged the general public to continue to partner with the Police in Ebonyi State in a bid to rid the communities of criminal elements.

It was previously reported that some armed police officers on Friday took over the entry gate of the All Progressives Congress, APC, Secretariat along Okigwe road in Owerri, Imo State capital.

The Eastern Updates gathered that the policemen, who restricted movement in and out of the secretariat, were complimented by officers of the Department of State Services, DSS, and are at the location to forestall a possible breakdown of law and order.

A party source, who spoke to reporters under the condition of anonymity said the security officials were mobilised to enforce the Supreme Court judgment reinstating Dan Nwafor, a member of Senator Rochas Okorocha political family as the state party chairman.

Speaking on the development, Cajethan Duke, Publicity Secretary of the APC in Imo State, said the state government is responsible for the new development.

He said the policemen were invited to forestall a possible breakdown of law and order.