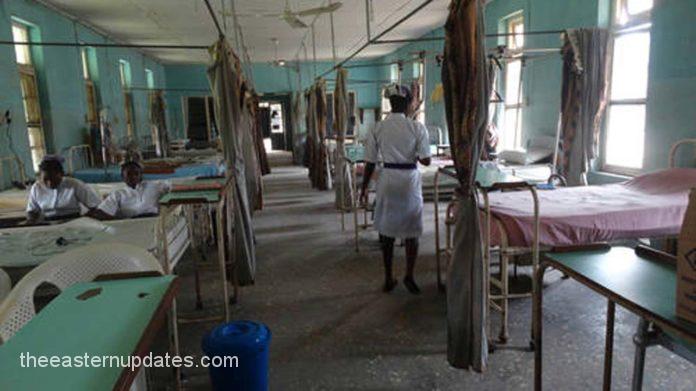 There was a mild pandemonium as tragedy struck at Obinze community in the Owerri West Local Government Area of Imo State on Monday after a family of 12 were discovered to be unconscious in their apartment.

The bizzare incident threw the whole community into a state of confusion as the victims were rushed to the Imo Specialist Hospital, Umuguma, Owerri. On arrival at the hospital, five out of the 12 victims were confirmed dead while doctors and nurses battled to save the lives of the seven others.

The head of the family, who happened to be one of the victims, is the Chief Driver of the senatorial candidate of the Peoples Democratic Party in Owerri zone, Uche Onyeagucha.

The Chief Driver, identified only as Kingsley, was said to be in his late 40s. Other victims are a two-year-old child, a 12-year-old girl and another adult.

A visit to the hospital, saw a large number of people, especially relatives and doctors and nurses working assiduously to save the lives of the victims who were on life-support machines.

One of the relatives of the victims who spoke to our correspondent said the cause of the incident remained a mystery to the family and community.

He questioned why a family of 12 could be found unconscious in a room in a duplex that has six rooms.

He said, “The head of the family is the chief driver of Uche Onyeagucha, the PDP senatorial candidate for Owerri zone. His name is Kingsley. He was supposed to drive his boss to the Sam Mbakwe airport this morning but he didn’t pick up his phone calls. His boss also called his wife but no response

“Uche Onyeagucha then sent his personal assistant to his house. On arrival, nobody opened the gate after all the knocks on the gate. Somebody now scaled the fence and gained access into the compound.

“Doors were forced open only to discover that the 12 of them were locked in a room. There were all unconscious. An alarm was raised and people gathered.

“They were rushed to this hospital where five including the head of the family were confirmed dead. Others are on life support machines. We pray that they make it so that they will tell the story of what really happened.

“The 12 of them included the chief driver and his family, siblings and children of his wife who came on a visit. The most painful is the death of the two-year-old child. What did that innocent child do? We suspect foul play.”

When contacted, the state police spokesperson, Micheal Abattam, said that the incident had not been reported to the police.