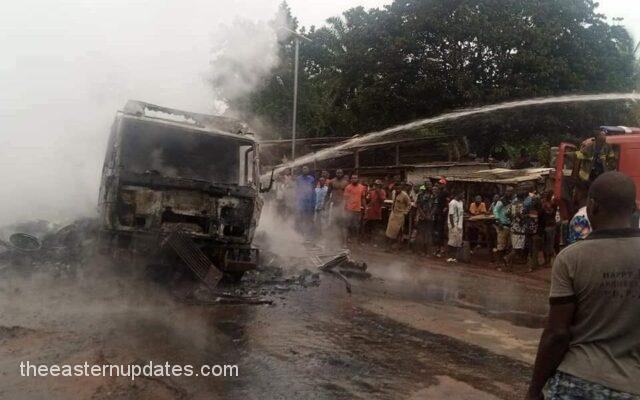 In a bid to fully enfirce the Sit-at-home order, some unknown arsonists have razed a truck laden with bags of cement in the university town of Nsukka, Nsukka Local Government Area of Enugu State.

The incident happened in the early hours of Monday.

The hoodlums were said to be enforcing the controversial ‘sit-at-home order’ along Beach junction in the area.

The police spokesperson in the state, Daniel Ndukwe, confirmed the attack to Newsmen.

Mr Ndukwe said police operatives observed that the truck was in flames while on patrol around the area.

He said no life was lost in the incident and that the operatives put off the fire with the help of residents of the area.

The police spokesperson, however, regretted that a part of the truck had been burnt before the operatives arrived at the scene.

“The bags of BUA cement have been secured and investigation also initiated,” he said.

The outlawed Indigenous People of Biafra (IPOB) had introduced the Monday sit-at-home order to put pressure on the Nigerian government to release its detained leader, Nnamdi Kanu, who is currently being detained by the State Security Service (SSS).

IPOB later suspended the order, preferring instead that the civil action would hold on days Mr Kanu appears in court.

But, despite its suspension, residents of the five South-east states – Enugu, Ebonyi, Imo, Abia and Anambra – have been observing the Monday sit-at-home order, mostly out of fear.

Some residents and motorists, including commuters, have been attacked lately in the region by gunmen for stepping out of their homes on Mondays and other declared sit-at-home days in ‘violation’ of the civil order.

IPOB, however, has repeatedly denied involvement in the enforcement of the civil action, accusing criminals of carrying out the attacks to blackmail the separatist group.

The group is leading the agitation for an independent state of Biafra to be carved out from the South-east and some parts of South-south Nigeria.

Mr Kanu appeared in court on May 18 in continuation of his trial. He is billed to appear in court again on June 28.