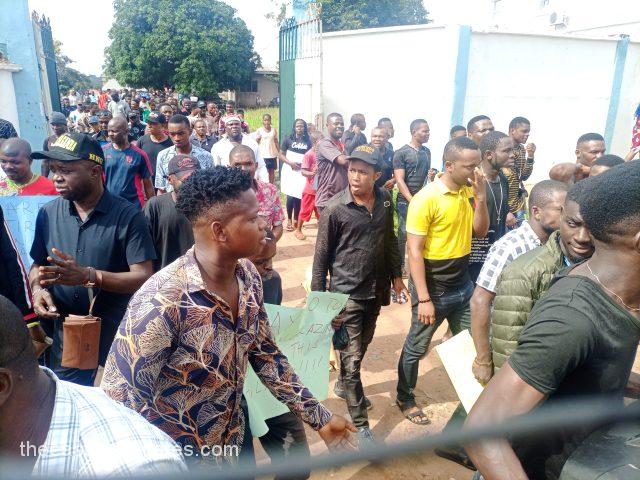 In response to the incessant insecurity in the area in recent times, the Isuochi youths in Umunneochi Local Government Area of Abia State have given the Federal and Abia State Governments a seven-day ultimatum to relocate the cattle market and remove all military checkpoints in the area.

The youths, on Wednesday, demanded this while protesting the incessant kidnappings by suspected herdsmen in the area.

The protest was as a result of the kidnap of the Prelate, Methodist Church Nigeria, His Eminence Samuel Uche and two other clerics last Sunday and their subsequent release after an alleged payment of ₦100 million ransom.

Carrying placards with various inscriptions such as “Enough is enough”, ” Garki cattle market must go”, “Army should open Ihube/Isuochi road”, among others, the youths numbering in hundreds and dressed in black attire marched to the Umunneochi local council headquarters at Nkwoagu Isuochi where they conveyed their grievances to the council chairman.

Chanting war songs, the youths decried the menacing activities and atrocities of herdsmen in the area.

Speaking during the protest, their spokesperson, Comrade Divine Uche, said the youths would no longer tolerate the continued harassment, torture, and kidnappings for ransom by herdsmen in the area and accused security agents especially the Army of not doing much to check the murderous activities of the herdsmen on the prowl in the area.

They demanded, among other things, the immediate relocation of Lokpanta regional cattle market which they alleged provided cover for the criminals instead of deterring them, demanding also that the military checkpoint at the Lomara junction be removed and the barricade by the soldiers blocking the Ihube/Isuochi road cleared without delay so that motorists would be plying the route again.

They lamented that the presence of the military checkpoint at the area had not stopped kidnappings and other criminal activities of herdsmen, “rather, abductions for ransom go on with impunity under the nose of the security agents at the area.”

They warned that if after seven days their demands were not met, they might be forced to take the law into their own hands to protect their people against criminal herders on the prowl in the area.

According to one Madam Nwoke, people in the area now live in fear of herdsmen who have been terrorising the people. She challenged security agencies to rise to the occasion to avoid angry youths resorting to self-help by taking the law into their own hands.

Responding, the Chief of Staff to the Council Chairman, Mr. Emmanuel Azubuike, who stood in for the chairman promised to convey their grievances to his boss, noting with concern, the atrocities of the herdsmen in the area and the docility of security agencies.

He alleged that cement bought by the council for the work was even destroyed by rain due to the hostile attitude of the soldiers adding that the council was already overwhelmed by the security challenges in the area, and appealed to both the state and Federal Government to come to their rescue.

When contacted, the spokesman, 14 Brigade Ohafia, Lt Omale, said he was in a conference.

However, leaders of the cattle market in Lokpanta have always denied the allegation that criminals are being harboured in the market.