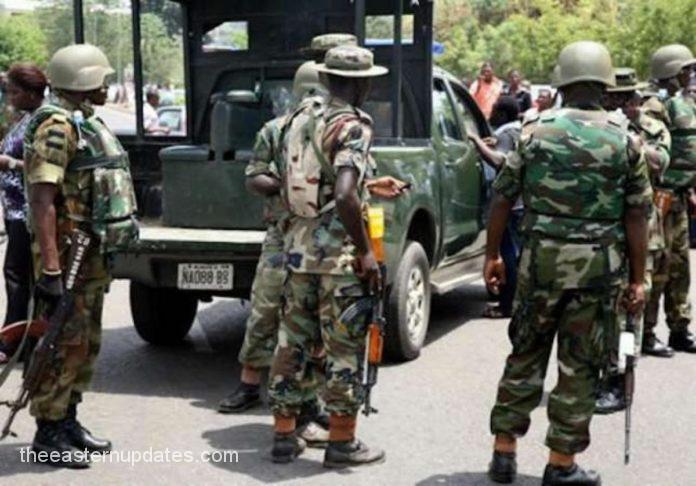 Fresh reports hitting the desk of The Eastern Updates have revealed that the Nigerian Army has said an Improvised Explosive Device (IED) planted by members of the outlawed Indigenous People of Biafra (IPOB) and its militant wing, ESN, has exploded, causing “severe injuries” to two of its members.

Army spokesperson, Onyema Nwachukwu, disclosed this in a statement on Wednesday.

He said the incident occurred along Eke Ututu – Orsu Road in Orsu Local Government Area of Imo State on the same Wednesday.

“The dissidents inadvertently stepped on the IED which they had earlier planted along several routes in Orlu, Orsu Local Government Area, while they were attempting to evade troops’ onslaught against terrorists in the area,” he said.

“The outlawed group has severally planted IEDs along troops’ patrol routes in a failed effort to bring harm to the troops,” Mr Nwachukwu added.

The army spokesperson urged residents of South-east to assist the Nigerian Army with information about possible areas where these explosives have been buried by the outlawed group for proper evacuation and disposal.

Security in Nigeria’s South-east has deteriorated in recent times with attacks by armed persons reported almost on a daily basis across the region.

Two states in the region – Anambra and Imo – have witnessed some of the worst attacks lately. The attacks often target security agencies, government officials and facilities.

The Nigerian government has accused IPOB of being responsible for the deadly attacks in the region. But the group has repeatedly denied their involvement in the attacks.

The separatist group is leading agitation for an independent state of Biafra to be carved out from the South-east and some parts of the South-south Nigeria.

The leader of the secessionist group, Nnamdi Kanu, is currently being detained in Abuja where he is facing trial for treason.

Nnamdi Kanu appeared in court on May 18 in continuation of his trial. He is billed to appear in court again on June 28.