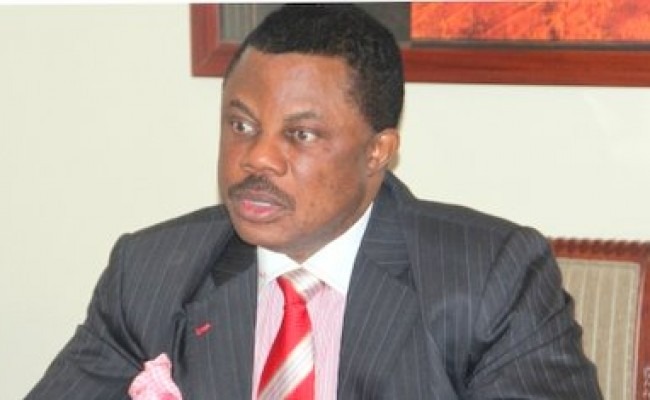 The people of Ezenwelike Community in Eziora Ozubulu, Ekwusigo Local Government Area Anambra State, yesterday were seen protesting against the alleged forceful take over Ezenwelike-Anaocha land by a private company.

Addressing newsmen on the land, beside Ekwusigo Local Government Area, Chairman of Ezenwelike Community, Mr. Alex Asomba, said that forty-one years after the government of Old Anambra State said it acquired the land for the public interest, nothing has been done there, only for them to see a private company coming to build there.

He said that successive administrations had come and gone after the government of Old Anambra State, led by Chief Jim Nwobodo, but none did anything on the land and they patiently waited for governments promises of setting up different projects that never materialized, until the administration of Mr. Peter Obi, gave them back the land which they were reportedly said to have been farming on.

‘For what purposes does the government take land, is it not for public interest. Why private interest now. What we want is the land, our only land inheritance from our fathers. We have not given it to anybody because even when Chief Nwobodo’s administration acquired it there was no agreement with our people, no Ezenwelike son or daughter has signed any paper ceding this land to the government.

‘You cannot just take our land without any MOU, dialogue, or agreement with the community, it is not done anywhere. Before the government takes over any land for any purpose, it must be gazetted and the people must be informed.

‘We planted cassava in the land, but recently, the company came without informing us and cleared and destroyed all the cassava farm in the massive land and when we asked the officials of the company we saw there, they claimed that government has given them the land for building industry.

“We are here today to ask and know why the land Chief Nwobodo laid a foundation stone for a metallurgical industry in 1980 during the Old Anambra State, is turning to a site for a private company.

‘When the State was divided into two, Enugu and the Anambra States, the then Governor Chinweoke Mbadinuju, came and said he was going to establish Foundry and Machines Tools Factory, FUMTOP, on the land and our people accepted without any objection, why are they now giving it to a private company.

‘Forty years after, the FUMTOP was not established my people decided to come into the land through former Governor Peter Obi, who gave us back the land to farm cassava in it, we even built shops in front of the land, but today a private company is building there, and we will never allow that without due process followed.

‘I have asked my predecessors if they had any agreement with the State government or any private company on the land, but they said no it was then I went and asked who the private company is and they gave us the name.

‘I demanded to see any agreement or Memorandum of Understanding with our former administration or anybody on the land, including the papers they claimed was given them by the government but they did not have anyone to show us.

‘We believe they are dropping the name of the Governor by claiming that Anambra State Governor, Chief Obiano gave them the land and Certificate of Occupancy, and that is why we want to draw the attention of the Governor with this protest to know if he is aware of the company presence there.

‘However, if the government wants our land, the due process must be followed, that is all we are asking for otherwise nothing will be done on that land. We will resist any private company with our blood there, ” the protesters submitted.