War Is Not Something To Wish For – Sultan To IPOB 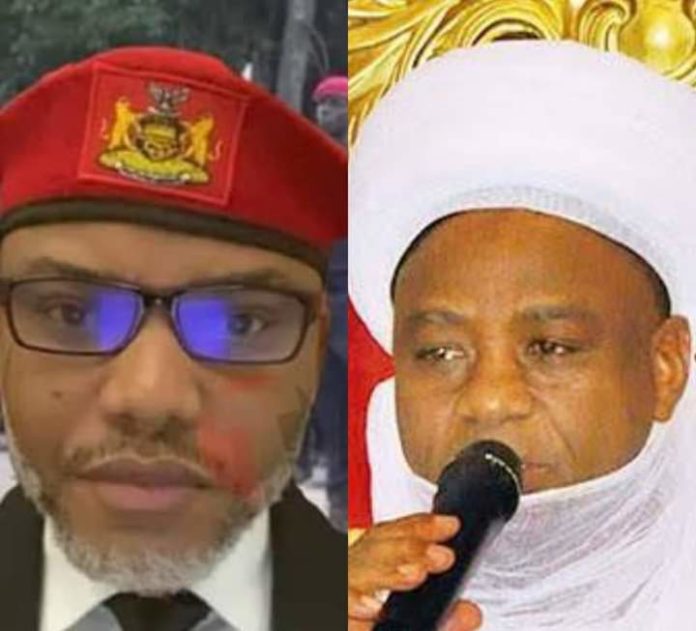 The Sultan of Sokoto has issued out a warning to the Indigenous People of Biafra asking them to stop making statements that are capable of pushing the country to a full-blown war.

The Sultan who spoke in a statement also blamed the government’s inaction and unregulated statements on social media as responsible for the avoidable conflicts.

‘War is not something to wish for, even when you think you will eventually win it. During my career as a military officer, my tour of duty took me to Pakistan and the borders of Afghanistan, where I saw conflicts and deaths and disruptions of lives with people who were otherwise comfortable, finding themselves in IDPs (internally displaced persons) camps with all the indignity and sufferings.

‘Before then I was in Liberia and Sierra Leone where I saw the results of ravaging civil war with inhuman atrocities afflicted on fellow citizens and this had left a deep scar on the psyche of these nations. And the most recent examples/happenings in Syria and Yemen are still fresh in our minds. In all cases, the conflicts disrupted their progress and destroyed their opportunities and they are still struggling to catch up with the rest of the world.

‘We need to appeal to our senses to realize that no one has a monopoly of violence and returning violence with violence only multiplies violence. It is not bravery to attack vulnerable people when you can resort to law; it is savagery.

He called on traditional and religious leaders to educate and restrain followers from fuelling violence with their speeches.

The traditional ruler also reiterated calls on the Nigerian government and state governments to act promptly.

He said, ‘Nation-building has always been a slow and painstaking process. This is particularly so when these nations are created by colonial fiat.

‘The colonial authorities used the divide and rule techniques, where insinuations of suspicions among different peoples and tribes was the main tool of governance. By disrupting the slow but sure process of social integration, they generate social tension which needs to be managed over time to avoid conflicts.

‘Our founding fathers have done a lot to ameliorate these challenges, heal a lot of these wounds and suspicions. Even when the bitterness planted led to civil war, the military leaders who brought the civil war to its end quickly created policies like the policy of ‘No Victor No Vanquished’ which did a lot to assuage the bitterness and douse the tension.

‘Similarly, policies like the National Youth Service Corps, which gives young people the opportunity to live and know other fellow citizens, the unity schools located in different parts of the country and the visits between leaders of the traditional institutions and holding joint meetings, etc. All these and many more went a long way to bring about healing, understanding, and accommodation.

‘Unfortunately some of these gains were eroded over time. Today, we are at brinks again. In the last few months, tempers have run very high, reckless statements from ethnic champions have provoked all manners of reactions which subsequently led to the loss of human lives, and the property and livelihoods of many citizens. While this was fuelled by social media, the inaction of the government has allowed much avoidable loss of lives to happen.

‘As educated elite, we must reflect deeper and learn from the history of other countries. Societal problems are human and we should be educated enough to know that we can solve our problems without having to carry a stick much less fire a gun. No problem is beyond dialogue; even when you go to war, at the end of it all you must sit around the table to work out peace.

‘We need to reiterate our calls on government at both federal and state levels to act promptly, swiftly and decisively. Any inaction may be construed as weakness. The government must send clear signals and walk its talk. Traditional institutions, even as they have no control of the coercive instruments of the state, can do a lot to restrain their people from taking the law into their hands, for these institutions enjoy the trust and confidence of their people.’