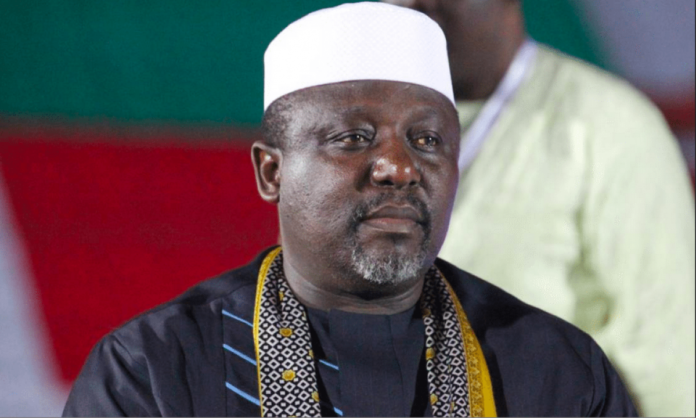 A member of the panel of inquiry that investigated allegations of Embezzlements and looting pertaining to the Owelle Rochas Okorocha-led administration has revealed that the evidence against the former governor is mind-boggling.

The member of the panel, who wished to remain anonymous due to the nature of the case and fear for his life informed an online news medium that the indicted governor is in for more heartbreaks by the time the panel’s recommendations are carried out to the latter.

In his exact words, he said, ‘Rochas should stop irritating us:
I am going to tell you two stories.

‘One. The Owerri-Orlu road was awarded to a contractor for dualization at the cost of N2.8b. The contractor set to work and certainly delivered substandard work as all he did was to expand the road and used blocks to erect at the center of the road. Hurray! The road has been dualized. But the main story is about to come. Somewhere down the line, Rochas and his conjurers came up with another plan. The Owerri-Orlu road was again awarded to four companies for the sum of N12b. They were paid in full and a peep into the statement of accounts of the companies reveals they were run by one and the same person. At the panel of inquiry, the original awardee claimed that he never saw any other company on the road when he was working on the road. He claimed, without contradiction, that all the works done on that road was done by him and that as of the date the government still owes him N2b because he was just paid N800m. Now, see Rochasism! The four contractors who were awarded the road for N12b did not do anything on the site but were paid in full. The contractor who actually worked on the site has not been paid his money to the full. You may ask? How was a contract that was awarded to a contractor, re-awarded to another four contractors? Now you are getting the gist. The true contractor who worked on the road is one of those who were awarded contract orally by Rochas and who believed him on grounds of a governor’s honour and put their resources to work for their state.

‘Rochas eventually refused to pay them instead he now awarded the contracts with documents to his companies and moved the money away!’

‘The second tale is the police headquarters in Owerri. Again, as usual, he told a contractor to construct the building. He advanced him about N300m and the guy literally borrowed money to complete it. Rochas woke up one morning and awarded the contract to Zigreat Nigeria limited for N5.6 billion. Who owns Zigreat? That is the gist. At the panel of inquiry, a personal assistant to Dr. Paschal Obi reported that he owns Zigreat.. but one morning, Dr. Paschal asked him if he has a company to which he replied in the affirmative. And he was told to provide his account details wherein large sums of money running into tens of billions of Naira were paid in and transferred out. The guy said he still lives as a tenant in Owerri.

‘So when Rochas talks crap or tries to call us fools with his rhetorics, I am usually gutted! But I want to pass a note to Rochas and his crew. I feel the street! The street is very angry! If he keeps up with these dramas especially the event of last Sunday, the news from the street is that they will set the property, Rochas, and his crew ablaze. I think Rochas should know that the game is up.

‘Finally, please tell the IG to stop interfering with the judicial process in Imo state. We heard the rumour that he called on the OC legal and instructed him to remove the name of Rochas from the arrangement paper! IG please stop such rough play. On that too, tell the Abuja judges especially of northern extraction that they should leave Imo State alone. There is a strong rumour that they want to quash the white paper that indicted Rochas or still restrain the publication of the reports of the panels of inquiry! They should stop the shenanigans! The street is charged and if the street reacts.. trust me, it will be hot for all’