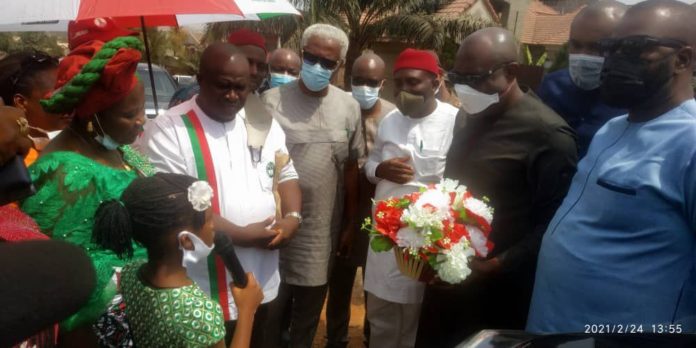 The appeal court had on Dec. 2020 had set aside the judgement of Justice Okong Abang of the Federal High court, thereby acquitting Metuh of the seven years imprisonment he was serving at that time.

Metuh whose first point of call in Anambra was Awka was warmly received by His party, PDP at the party secretariat in the state capital which saw the presence of all the political aspirants and State Executive Council.

After the glamorous event in Awka, a civic reception was organized for Him by His party at Home lead by the Local Govt Excos and His ward Chairman. His Community, Umuanuka also organized a warm reception for Him with numerous gifts that were presented to honour Him.

Metuh in His vote of thanks, thanked God for saving His life throughout His ordeals and thanked His people who stood firmly by Him.

He assured His people of His unwavering support to Community development as He donated a transformer to them. He also acknowledged the presence of the Anuka Women wing who made the event so colourful and offered scholarships to over twenty-five indigenous persons from the community.

He also assured the youths of His readiness to assist them with employment and requested them to forward their CVs.