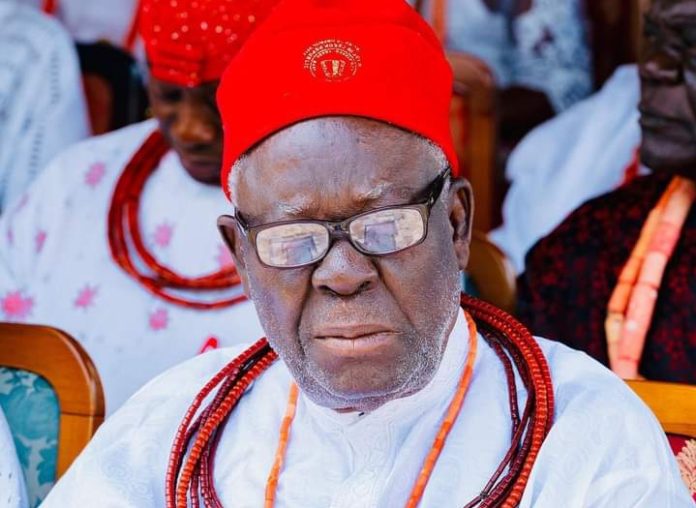 Delta State Governor, Ifeanyi Okowa on Wednesday announced the decision of his family to hold a private burial for the late patriarch of the Okowa family, Pa. Arthur Okorie Okowa.

Pa. Okowa, a retired teacher and community leader passed on recently at the age of 88.

Governor Okowa in a statement he personally signed, appreciated Nigerians for their condolences and show of love since his father passed on.

He thanked all those who came to condole with him and those who called or sent messages of condolences to him and his siblings.

The governor announced that ‘in view of the second wave of the COVID-19 pandemic in the country, we have opted to hold a private burial ceremony some time this month, while a Celebration of Life event will take place on August 21, 2021.

‘Hopefully, by then the current challenges of the COVID-19 pandemic would have given way to a freer and more assured environment.’

He described his late father as a ‘huge pillar of support,‘ and said that he would miss his wise counsel.

‘On behalf of the Okowa family of Owa-Alero, Ika North-East Local Government Area, I wish to thank all who have taken time to commiserate with us on the death of my beloved father, Sir Arthur Okorie Okowa.

‘Ever since the news of his demise, our family has been overwhelmed by the outpouring of goodwill from a wide spectrum of political, business, religious leaders as well as the mass of Nigerians.

‘My siblings and I are deeply grateful for the show of solidarity, which has, in no small measure, helped us to cope with Papa’s passing.

‘Although he died at what may be considered a good old age, the death of someone so dear cannot but leave one with a sense of void.

‘My late father was a strong pillar of support all through my political/public service career.

‘I drew immeasurably from his fountain of knowledge and wisdom, and he was very passionate about the growth and development of our beloved Delta State.

‘As a family, we will greatly miss his physical fellowship but we thank God that he lived a good and full life; he has etched his name in gold with his legacy of hard work, selfless service, discipline, godliness, love for others/community, and passion for positive, lasting change,‘ he concluded.