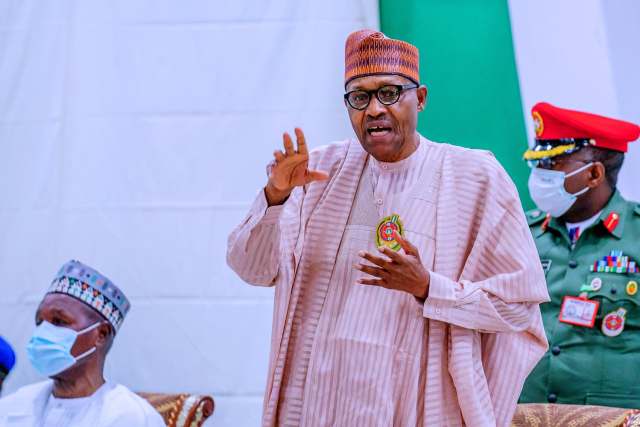 Coalition of South East APC Integrity Group (COAPCIG), has appealed to President Mohammadu Buhari, to include somebody from the South East in the appointment of service chiefs, adding that the exclusion of the region would portray him as sectional leader.

COAPCIG National Coordinator, Dr Emeka Nwosu and National Secretary, Amarachi Obinna, in a statement yesterday explained that a review of the appointments to include the region would be in the interest of fairness and equity in line with the nation’s federal character principles.

While claiming to have worked very hard for the victory of APC in 2015 and 2019, Nwosu said the group would continue to support the present administration in all its activities.

‘We write with sincere heart to express our appreciation to the President and Commander-In-Chief of the Armed Forces of Nigeria, President Muhammadu Buhari for taking the first step in rejiggering the security architecture by sacking the former service chiefs.

‘This is a right step in the right direction and a beginning of a journey to an effective security framework of the country.

‘We, however, wish to make a very deep observation concerning the composition of the service chiefs which again, does not include anyone from the South East. This to us, is another heart-breaking news that we beg the president to correct soonest.

‘This, we find to be very disturbing, and we therefore, appeal to Mr President to have a second thought about his action.

‘We are bothered about his exclusion of Igbo people in his key appointments including the latest appointments of service chiefs.

‘We feel that he would give the igbo Nation a true sense of belonging and naturally endeared him more to the heart of Igbo nation worldwide thereby clearing the erroneous impression that APC government does not like the Igbos if he reviews his latest action,’ he said.

He added: ‘We wish to remind those who may be using the land mass and the last census figures of the South East to judge the capacity of Ndigbo.

‘These people may have also misled the president that they can do without igbos. We wish to remind such people that there is no single tribe in Nigeria that has the national and international spread like the Igbo tribe.

Nwosu concluded: ‘we call on the Nigerian Army and the security forces to be decisive with them.

“IPOB is a terrorist group as recognized by the Nigerian law. The group and its adherents do not deserve to be treated with kid gloves. They don’t have our support in the South East.’