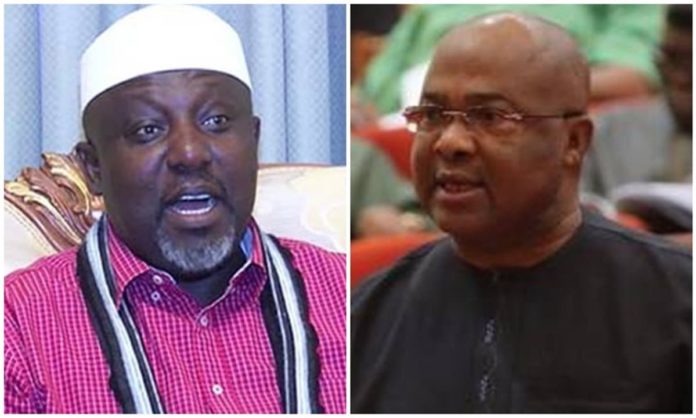 Imo State ex-governor, Senator Rochas Okorocha has told Governor Hope Uzodinma to stop ‘the blame game’ while stating that he should rather contend with what he termed ‘failure’ after one year in office.

Responding to a comment made by a media aide to the Imo governor that Senator Okorocha was responsible for the dwindling fortunes of the state, the aide dismissed the statement as intended to shift the blame of Uzodinma’s ‘government’s failure or ineptitude’ to the senator.

According to a statement by Senator Okorocha’s Special Adviser on Media, Sam Onwuemeodo:

‘The truth is that, if after one year, the governor’s handlers still brandish Okorocha’s name as their only defense for the government’s failure or ineptitude, then, something fundamental is obviously wrong with the administration.

‘Governor Hope Uzodinma and his media apostles should stop the blame game. The blame game should have been over after the celebration of his one hundred days in office. But it has continued, even after one year. Indicating that there is no light at the end of the tunnel.

‘The governor and his media disciples ought to have known by now that blame game or passing the buck has become “Old School”, belated or eccentric, with regard to administration.

‘In celebrating his own one year in office, Okorocha did not blame those who had been governor before him, including His Excellencies, Chiefs Achike Udenwa and Ikedi Ohakim. He rather listed what he had done with the mandate given to him by Imo people under one Year.

‘He didn’t pass the buck to his predecessors. But told Imo people what he had achieved in one year. For instance, in his first one year, Okorocha transformed the Government House that had looked like ‘refugees Camp’ into a befitting Government House.

‘He built the Sam Mbakwe Exco Chambers, Ndubuisi Kanu Council Chambers. Constructed the Police road that demarcated the Police Command Headquarters among others.’

The statement continued that ‘the governor had, before now, wanted any proof on how disdained or disenchanted Imo people have become about his government, that proof came on Tuesday, January 12, 2021, at the burial church service of Bishop Gregory Ochiagha, at the Holy Trinity Cathedral Orlu, with many Bishops, Priests and Nigerians from all walks of life, in attendance.

‘At the service, the governor could not, while making his speech, as protocol demanded, recognize the former governor of the State, Senator Rochas Okorocha, who came to that burial from Port-Harcourt, Rivers State, where he had Commissioned some projects for Governor Nyesom Wike in the spirit of nation-building and conviviality.

‘But when the priest meant to introduce the dignitaries at the burial service introduced Senator Okorocha after he had introduced some other people before him, the Cathedral went into ecstasy. There was an ecstatically thunderous ovation that lasted for several minutes.

‘Imo people should not have been happy with the government when the governor had demolished the ultra-modern Somto hospital, the Akanu Ibiam tunnel, six befitting roundabouts, removed superior street lights, and destroyed other signature projects of Okorocha which he built with public funds when the governor has not built any. You do not demolish existing projects or structures built with Imo people’s money when you have not built any and expect them to be happy with you.