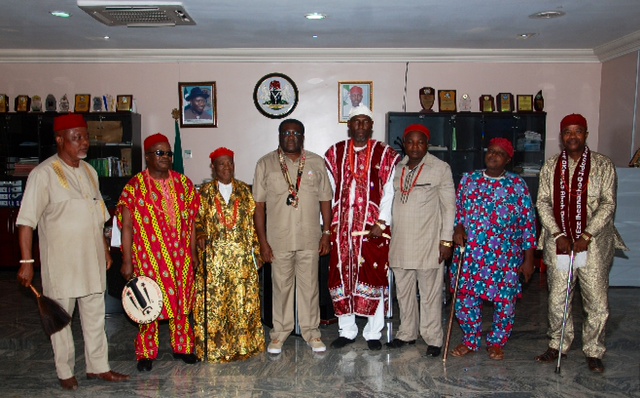 President General of the community, Nze Donatus Ekeh who presented Prince Leonard Eke to the Interim Management Committee Chairman Ahiazu Mbaise Local Government Chief Larry Chikwe on behalf of the community said the unanimous choice of prince Ekeh was as a result of the need to fill the vacuum created by the demise of their traditional ruler.
According to him, prince Uche Ekeh has been there financially, morally and otherwise for the community since his father’s death; thereby living up to his title “Eze Ako n’obi Eze” as he was crowned by his father.

While expressing his joy for the confidence reposed in him by his people, the Eze elect Prince Uche Eke admitted that his intention to serve the community was borne out of the need to set the area on the path of development.
He recalled that the community had witnessed stunted socio-economic growth since the demise of his father who sacrificed his all to secure the autonomy of the area.

The Eze-Elect revealed that the community had suffered lack of pipe-born water, good road and other social amenities for the past three years due to the absence of a traditional head.
Responding, the Interim Management Committee chairman Ahiazu Mbaise Local Government Chief Larry Chikwe thanked the people of Akabor Ahiara for selecting their ruler peacefully and tasked them to remain peaceful.
He assured them that he would transmit their documents to the Imo State governor senator, Hope Uzodimma for further action.

The ceremony was well attended by people of Akabor Ihenworie community, friends, family and traditional rulers including the Chairman Ahiazu Mbaise council of traditional rulers Eze Barnabas Mmadinobi and Prince Uche Warrior of Oriental Brothers International Band.
Report indicates that the minority in the community had frustrated efforts of the community to install prince Eke as their leader to replace their late traditional ruler, which had left the seat vacant for many years.