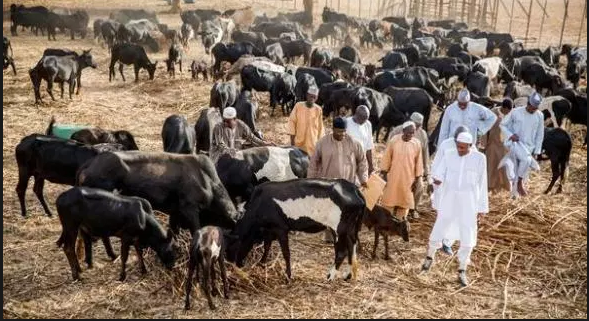 Abia State Government has a big problem at hand. This followed its attempt to relocate the Aba Cattle Market at the Ogbo Hill axis, popularly called Waterside, to Egbelu Obehie in Ukwa West Local Government.

The people of the area have sounded it clear to government that they rejected the relocation as tantamount to using their land for Ruga programme.

Some years back, government relocated the cattle market in Umuahia, known as Garki, to Lokpanta in Umunneochi LG, along the Enugu-Port Harcourt Expressway; when the location, which presently hosts the Shoprite Mall, became a sore point.

According to government, the menace of cattle, the indiscriminate pollution of the Aba River and contamination of the air had become a huge source of worry. It said almost everybody who lived in Aba passed through Waterside or voted for decent environment and agreed that Ahia Udele and its sister cattle trading site at Waterside were overdue for relocation.

It added that the Muslim community, led by Chief Musa Alhaji Iheakaram, and chairman of the cattle dealers, Alhaji Ibrahim Njida, were desirous of ending the menace at Waterside, provided government would give them an alternative place to continue trading peacefully like they had done in the over 50 years they had traded at Aba Waterside.

The state executive council mandated the Ministry of Trade and Investment to relocate the cattle market. But when it appeared the ministry was set to implement the directive, pockets of agitation came from the area.

Surprisingly, officials of the same government that reportedly took the decision from Ukwa were the ones kicking against the implementation of the policy.

Ironically, while Governor Okezie Ikpeazu, who chaired the Exco meeting where the decision to relocate the market was away on health grounds, Deputy Chief of Staff, Office of the Deputy Governor, Chief Don Ubani, was said to have led a delegation of people from Ukwa West, mainly those serving in the present government, to meet with the Deputy Governor, Chief Ude Oko Chukwu.

They were said to have gone to get clarity on the planned establishment of cattle market in their area, as the belief was that the actual intent was siting a Ruga     cattle colony.

In addition, the member representing Ukwa East and West Federal Constituency in the House of Representatives, Uzoma Abonta, faulted the proposed relocation of the cattle market to Obehie as stated by the Commissioner for Trade and Investment, Dr. Cosmos Ndukwe.

He alleged that the intention was to misrepresent and misinform the entire populace, thereby subjecting the people of Ukwa to a perpetual humiliation and intimidation, which spurred him to respond accordingly and set the records straight. He also accused the commissioner of insensitivity to his people, whom he said had suffered enough environmental pollution and degradation over the years due to oil and gas exploration and exploitation in the area.

The legislator stated that the planned establishment of a cattle market meant the same as “trading and grazing of cattle known as Ruga. The environmental impacts of both businesses are the same.”

He accused government of not bringing to their knowledge what he called the ill-intended plans of the cattle grazing and trading in an area like Obehie hence cannot ascertain its resultant effects and consequences.

He stated: “The destructive nature of the cattle rearers otherwise known as herdsmen cannot be underestimated considering the threats it pose to the local people and environment.

“Government should move the cattle market to another alternative and bigger site like Ngwa or Bende than Obehie because Ukwa have no land, having donated enough to the government for non-implemented gigantic state-claimed owned projects.

“Seizing our land forcefully to gratify private business persons or owners such as the cattle business and not even a government-owned business as we were informed that ‘one Alhaji’ wanted a place to continue his business by the government in grabbing Ukwa land shows their disregard for the people of Ukwa.

“It is good to know that Ukwa has a small land mass compared to other local government areas in the state. Government needs to consider the fact that Ukwa already is hosting various oil and gas operating companies causing huge pollution to the environment.

“The Egbelu land in question has been used for agricultural purposes, touching the lives of our people presently. Government should also know that what happened to Ogbor Hill, Aba, in terms of land degradation and environmental pollution, will rather be doubled at Ukwa if the cattle market is relocated to Obehie since Obehie has no river.

Commissioner for Trade and Investment, Ndukwe, described the agitation as unnecessary. He said government “is vehemently opposed to the use of any part of land in Abia for the establishment of Ruga settlement; hence, it promptly signed into law the bill that sought to prohibit grazing and trekking of cattle in the state.”

He told Daily Sun that he had no personal interest in the exercise but his ministry was carrying out a directive on a decision that was taken when he was not even in the state executive council: “It is false, malicious and an attempt to pit the government against the people when some persons described the planned relocation as having a Ruga undertone. The relocation of cattle market from Aba Waterside to Obehie will beyond anything, decongest the present site and even boost economic activities of its proposed location, since the place is in-between Aba and Port Harcourt.

“Government has a commitment to ensure that motorists and pedestrians are saved from struggling daily at the Aba Waterside area. That is why it became imperative that the cattle market should be relocated. The governor’s plan was that while the cattle market is moved to Obehie where a range will also be provided to avoid cattle straying to farmlands, the abattoir opposite it would be moved down the Aba River where it will not constitute any impediment to motorists.

“But since some people who should know better and tell their people the truth turned around to cast aspersion on my person for trying to carry out government’s directive, I think we should suspend everything until the governor resumes work.”