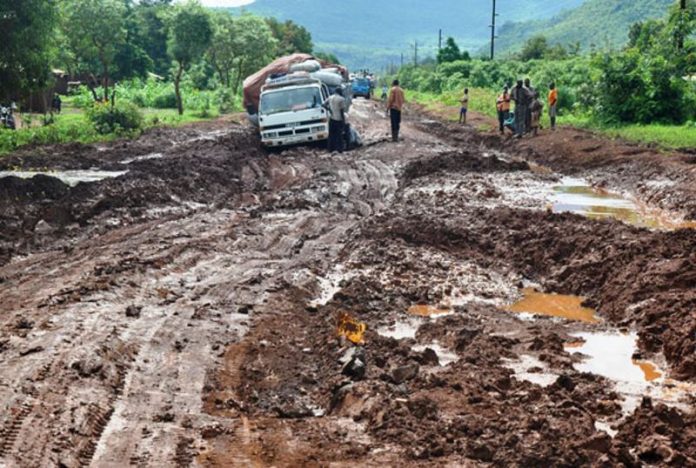 Residents and commuters have continued to see hell in the abandoned 50- kilometer Obehie- Akwete- Azumini- Ukanafun federal highway which is now deplorable and a deathtrap for all plying the road.

The contract for the dualisation of the 50-kilometre Obehie-Akwete-Azumini-Ukanafun highway linking Abia and Akwa Ibom States with a diversionary link to Rivers State, which is worth ₦34 billion, was awarded, by the Ministry of Niger-Delta Affairs, to Chinese Civil Engineering Construction Company, (CCECC) Nig. Limited in 2010.

The first section from Obehie Junction to Akwete is as bad as abandoned. It is filled with life threatening and vehicle damaging potholes down to Ohambele community in Ukwa East LGA of Abia State.

Front of Ukwa West LGA Secretariat in Okeikpe, Abia State is now a pitiable sight to behold, as that portion of the road is currently impassable, where all kinds of vehicles somersault on daily basis.

The member representing Ukwa East and Ukwa West federal constituency in the House of Representatives who hails from Akwete, Hon. Uzoma Abonta, who spoke to journalists on the abandoned project said the road qualifies as a regional road and should be taken over and completed by the Niger Delta Development Commission (NDDC).

He said “That road was awarded many years ago, through the Federal Executive Council. It is not a state road. It was actually initiated by me and the contract was awarded to a Chinese company. And they were waiting for payment of compensations and all that on the road. I’ve written to the Ministry of Niger Delta to please pay the Chinese company who claimed they’re being owed to continue and complete the road”

Hon Abonta said that “The federal constituency is an oil producing area. Till now, the people have been subjected to unbearable hardship, because of the nature of that road.

“During rainy season, we’re cut off. I’ve made several appeals to the Ministry of Niger Delta. We’ve also called on the NDDC which continues to provide palliatives on that road. Our argument is that NDDC should take it fully and pay the Chinese company to do the needful, because, what we’re getting now from the palliatives cannot put the road in order. From Azumini to Opobo Junction is very bad, while Obehie axis is a death trap, thereby cutting off the people of Ukwa from the rest of the country despite our contribution to nation’s development”

He said: “We’ve written NDDC to please come and assume the road since their parent body, the Ministry of Niger Delta is also involved. They should assume that the road as a regional project.”

Speaking further, Abonta said, “The road moves from Aba to Akwa-Ibom and Rivers State. It qualifies as a regional project.

Therefore, NDDC should take over. I have written Senator Enyinnaya Abaribe who represents Abia South Senatorial zone in the Senate. He  has also written to the Ministry but they kept on saying they’ll put it on their budget and when the budget comes, they’ll vote very little amount”

He said “The last time they provided N200 million. What will that amount do on that road? We argued and said, make it N1 billion so that the company can come back, but it fell on deaf ears. But we’ll not relent. We’ll keep doing the right thing. The road has economic viability. It leads to Akwa-Ibom and people coming from Rivers State and Abia use the same road. If people must move agricultural produce out, that road must be in good shape.”

A commercial motorcyclist, Edidem Sunday said the condition of the road from Ohambele community, Obohia, Ohanso, Akwete to Okeikpe, all in Ukwa East and West LGA are too bad to compare with the smooth side of Azumini to Ukanafun.

“I don’t know why they left the other side so bad. I enjoy taking passengers from Azumini Junction to Ukanafun and even down to Etim Ekpo. But it’s always a problem to move from Azumini towards Obehie in the raining season. Even most taxi drivers are afraid of going towards that route because it causes a lot of problems. I am just begging them to help fix that road, because it’ll help the people.

Most Akwa-Ibom Transport Company (AKTC) vehicles that normally ply this road are no more coming as usual. I don’t know whether they’ve found a new route, but we all know this road is easier and shorter,” he said.

Sunday explained that “the Opobo-Azumini-Aba road is also not good. Let them just help us and fix it. I’m a hardworking man. I don’t beg anybody for food. My biggest enemy is bad road. If the roads are good, I have enough traders and passengers to carry on daily basis and make genuine money.”