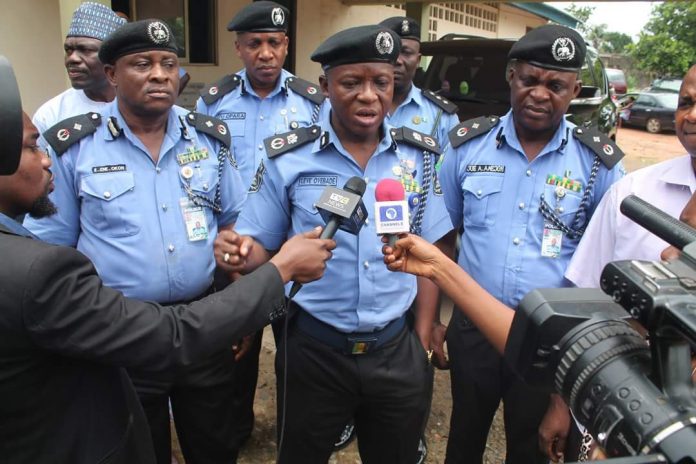 The Abia state police command said they have launched manhunt for nine suspects held at the Central Police Station (CPS), Umuahia, Abia State who escaped.
The suspects were said to have fled from the CPS on Saturday night.
About 29 suspects escaped from the CPS in Umuahia, the state capital, out of which 20 have been re-arrested.

It was gathered that the incident which took place at about 8pm on Saturday, occurred when the suspects requested from the cell guard water to ease themselves.
According to information, the cell guard innocently opened the cell to hand the water to the suspects.
As the cell guard opened the cell door,  the suspects who were said to have pushed it against the guard, overpowered him and fled.
Investigations revealed that the cell of  CPS, Umuahia like any other police station in the state is over stretched beyond its capacity as  prisons have been reluctant to accept suspects due to the outbreak of COVID-19.
This situation is said to have caused the courts to order the remand of some of the suspects in the police custody.
When contacted, the command police public relations officer, Geoffrey Ogbonna confirmed the incident.
He called on members of the public to be on the lookout for the fleeing suspects and report to the nearest police station.
Ogbonna promised that soon, all the fleeing suspects would be rearrested and prosecuted.
THE EASTERN UPDATES
Facebook
Twitter
WhatsApp
Email
Telegram
Previous articleAnambra Election: Don’t Bother Contesting – Primate Ayodele Tells APC
Next articleUNICEF, Imo Govt Move Against Female Genital Mutilation