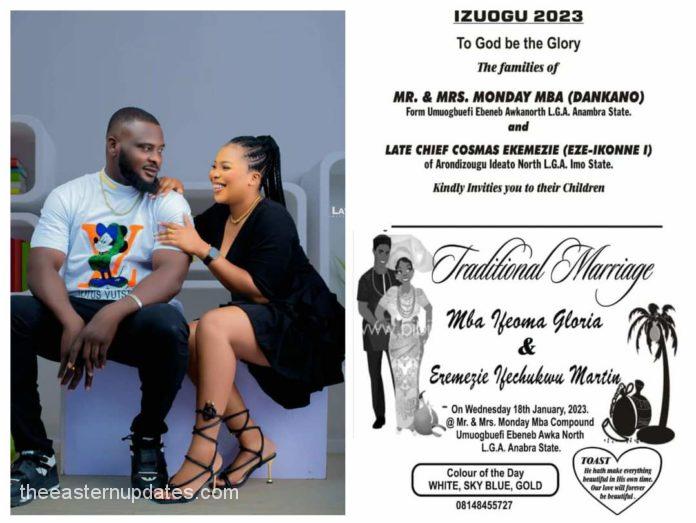 The Eastern Updates reports that the gunmen, also, shot dead the younger brother to the man, who was driving them to the community in a commercial tricycle (Keke).

Martins Ekemezie, was returning home with his fiancee to conclude their wedding arrangement when they met their untimely death.

A source from the community, who spoke to reporters stated that the lovers, and a brother to Ekemezie, were shot inside the commercial tricycle (Keke), killing them on the spot.

According to the source, the traditional marriage ceremony was slated for January, 18, just a week to the event before they were killed.

The source further said that the killing has caused fear and apprehension to residents, forcing people to flee the community in large numbers.

He said: ‘This is the situation in Arondizuogu for some time now, a young man was killed with his fiancee, and the brother, who was driving them home in a Keke. This has become almost a usual occurrence in Arondizuogu, our people no longer sleep with their eyes closed.

‘It is no longer the burning of vehicles or houses, but the killing of people or kidnapping of people. We are tired of these incidents. We are appealing to the Police and Army to send patrol teams to our community. People are running away from the community in their numbers.

‘Our people did not come home for Christmas, and New year celebrations. The few who came could not move around with their cars. Our country is doomed. As we speak, there has been mass exodus of people from Arondizuogu to other communities since morning.

‘We are no longer safe in Arondizuogu, students are afraid to  go to school, our mothers no longer go to market for fear of the unknown. Please, help us before we are totally wiped out’, the source lamented.

Imo State Police Public Relations Officer (PPRO), Mr. Michael Abattam, who confirmed the incident, however, added that he was  not sure about the death of the bride to be