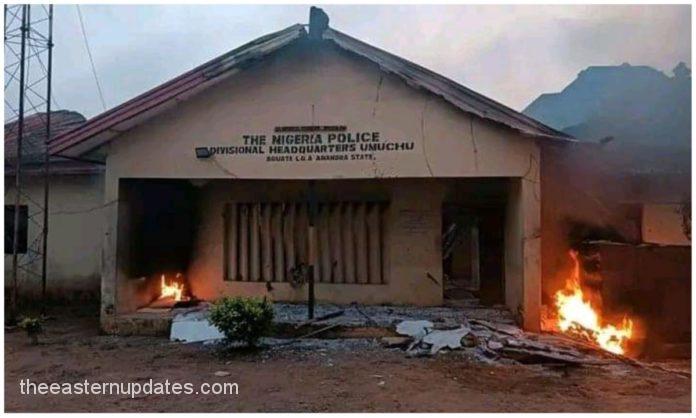 Some yet-to-be-identified gunmen on Sunday burnt down a Police Station in Umuchu, along the Umuchu-Achina road, Aguata Local Government, Anambra State.

Sources said the hoodlums stormed the place at about 3 am on Sunday and set the facility on fire.

The Eastern Updates gathered that the station was just recently renovated by members of the Umuchu Improvement Union as it was destroyed during the #EndSARS protest in 2020.

According to a source who spoke to reporters on the condition of anonymity, the community leaders, had renovated the station and its adjourning infrastructure and upgraded it to fit the status of a divisional police station before donating it to the Nigeria Police Force to help in the fight against insecurity in the area.

Read Also: Confusion As Father Of 4 Passes On In Police Cell In Abia

There was no record of casualty as the security operatives had vacated the station to another location after it was destroyed during the #EndSARS protest and were yet to return.

The station was vacated after it was attacked in 2020 and there was no police officer on duty at the time of the Sunday attack.

Confirming the incident, the President-General, of Umuchu Progressive Union, Charles Ezeabasili, said, ‘This is disheartening and unfortunate. While the UIU has upgraded facilities at the police station and awaited the return of police personnel, the hoodlums are busy destroying, demolishing, and burning down the facility meant for our own good. How do we progress?’

The Eastern Updates reports that the insecurity in the south east has continued to heighten in recent times.