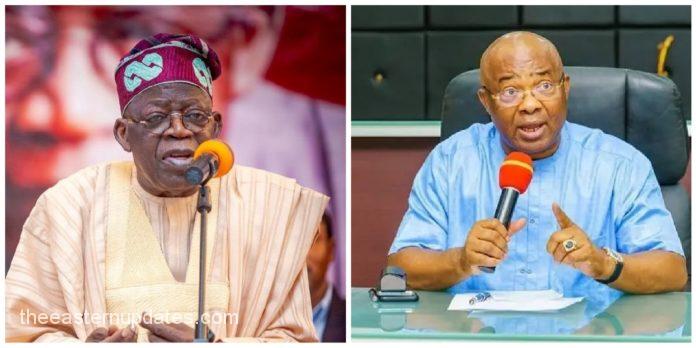 The presidential candidate of the All Progressives Congress (APC), Bola Ahmed Tinubu, will on Thursday (Today), be in Owerri, the Imo State capital, to hold discussions with private sector drivers, comprising investors, manufacturers, traders, among others, preparatory to his main campaign in the state in the coming days.

Governor Hope Uzodimma made the disclosure on Wednesday while speaking with the media on arrival at the Sam Mbakwe International Cargo Airport, Owerri, from the APC Presidential Campaign flag-off in Jos Plateau State on Tuesday.

The Governor, who is also the APC Coordinator for South East Presidential Campaign Council, had reiterated his call on the Igbo in Jos to be part of the government of Nigeria at the centre by keying into the agenda of the APC, which he said is already a success story in Imo.

Read Also: 2023: I Will Retun You To Anambra, Tinubu Mocks Obi

Governor Uzodimma said that he has not seen any calculation in the population of over 200 million people in Nigeria that will ‘whisk-off APC,’ noting that ‘in Imo State, there are things to show why all and sundry should encourage APC.’

‘And you don’t change the winning team as APC is wining in Imo State and other States of the Federation, so it should continue,’ he insisted.

Uzodinma encouraged all APC members to be part of the above programmes.