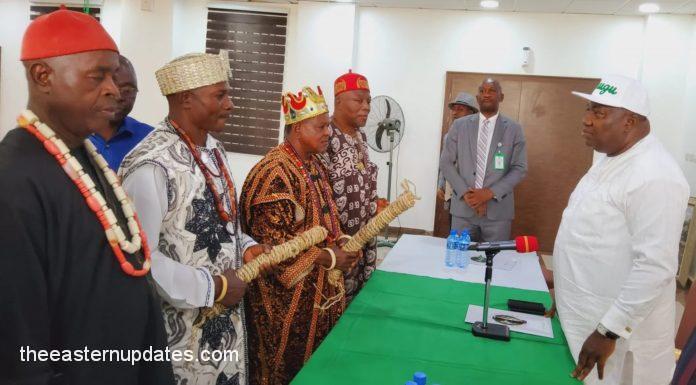 Some of the indigenes of the four communities which are situated in Enugu State that make up Igbo-Eno where the newly established State University of Medical and Applied Sciences (SUMAS) has been sited, namely Orba, Imilike, Ovoko and Iheaka, on Tuesday have recently showered some encomiums on Governor Ifeanyi Ugwuanyi and also lauded him for his sterling vision in siting the medical university on their land, while also describing the governor as a great achiever.

The people had fully expressed gratitude to Gov. Ugwuanyi for bringing the socio-economic development to the communities through the establishment of the SUMAS, Igbo-Eno, disclosing that they are happy and fulfilled that they donated their land for the massive project.

SUMAS host communities made the commendation when representatives of their indigenes jointly paid a thank you visit to the governor at the Government House, Enugu.

Led by the traditional rulers of the four communities of Igbo-Eno, namely HRH Igwe Melitus Agbo, HRH Igwe Emmanuel Ukwueze, HRH Igwe Greg Ugwu and HRH Igwe S.J.C Onah, the Presidents General of the town unions, representatives of the land owners and stakeholders of the communities, including the Deputy Chief of Staff, Government House, Enugu, Prof. Malachy Okwueze, Chairmen of Udenu and Igbo-Eze South local government areas, Hon. Solomon Onah and Hon. Vitus Okechi respectively, the people said that they are highly delighted that Gov. Ugwuanyi’s administration utilised the land they donated for the medical university effectively and timeously in spite of the state’s lean resources and the nation’s economic challenges.

They added that Gov. Ugwuanyi through the establishment of the SUMAS has not only brought massive development to the host communities but has also built human beings who will benefit from employment and flourishing business activities within and outside the school environment.

The host communities stated that Gov. Ugwuanyi has written his name in gold through the establishment of the medical university and will be remembered from generation to generation for the legacy which is second to the one bequeathed to the people of Nsukka zone and beyond by the late Dr. Nnamdi Azikiwe, who attracted the famous University of Nigeria Nsukka (UNN) to the area.