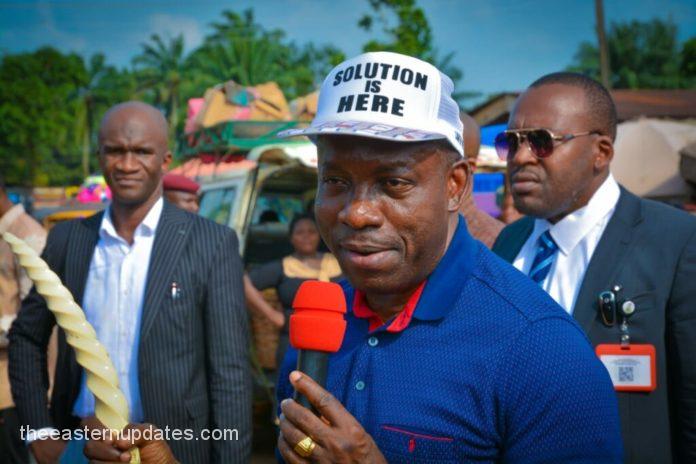 Anambra State Governor, Chukwuma Charles Soludo has awarded more contracts for the construction of road projects in Nnewi and its environs.

The Eastern Updates reports that the governor embarked on an assessment tour of the very bad roads in Nnewi including, Ogbufo, Okpunoeze Uruagu Nnewi, and Umudim Road, among others.

Speaking at Okpunoeze Uruagu Nnewi Road, the Governor who has been working round the clock to ensure Ndi Anambra enjoys true dividends of democracy, disclosed that the road has already been awarded for construction, saying that he came personally to inspect the road and feels the pulse of the people by himself.

“I assure you that the Contractors will commence work on the road soonest, once the rain subsides.

‘This constructed road will go all the way to Teaching Hospital and Nkwo Nnewi.

‘We are very particular about roads that play very vital roles in the lives of the people. We want to ensure that communities are linked together because that is one of the ways to enthrone economic prosperity in the state’. Governor Soludo assured.

The people in response thanked the Governor for the good work he is doing in the state, saying that the Ndi Anambra will continue to support him to deliver on his promises.

The Commissioner for Works, Engr. Ifeanyi Okoma, Commissioner for Commerce and Industry, Mr Obinna Ngonadi, Chief of Protocol, Chinedu Nwoye among others joined the Governor on the road inspection.

In another report, as part of measures being put tother to ensure equal opportunity and transparency in revenue streams, Governor Soludo on Tuesday hosted a second public bid auction for revenue agents.

The event which took place at Government House, Awka was described as flying revenue streams by the government.

The revenue streams that were up for public bid include; Statewide Gaming and Lotto Fee Collection, Statewide Public Toilet and Convenient Tolls, Statewide Abbatoir Fees, and Statewide Car Wash.