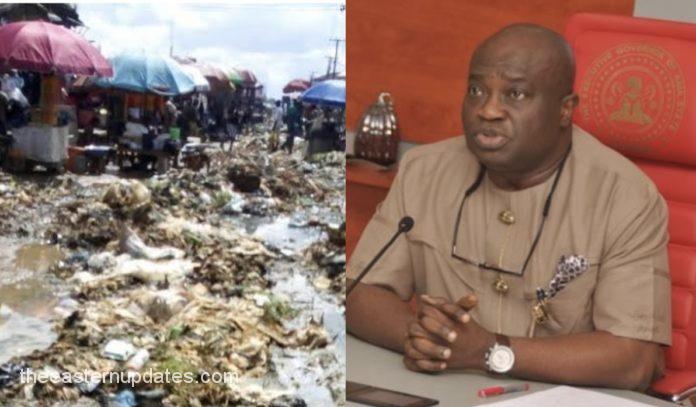 Abia State Government has declared that it would relocate traders in part of Ariaria International Market Aba to safer areas of the market as part of measures to checkmate the menace of flooding in the market.

Commissioner for Trade and Investment, Chief Okiyi Kalu, who disclosed this in a press release, said that Gov. Okezie Ikpeazu had already approved the measure.

The statement read in part: ‘After due review of the current flooding situation across the country, affected areas in Ariaria and the subsisting forecast by Nigeria Hydrological Services Agency (NIHSA) and Nigerian Meteorological Agency (NiMet) advising further preparations for more floods, Governor Okezie Ikpeazu has approved the immediate relocation of traders in A-D zones of A-line to available shops in the A block zone, So-Safe zone and Ochendo zone in Ariaria International Market for temporary accommodation without any fees pending the completion of the ongoing work.

‘The executives of Ariaria market committee and security agents are to supervise this immediate relocation exercise to avoid further damage to goods with possible risk of collapse of some structures within the affected zones.’

According to the release, Government has also directed the contractor handling the execution of a new culvert and channels to evacuate flood waters two weeks to ensure completion of the project.

‘Government has also commenced implementation of the 2-year tax waivers recently granted to the traders affected by the ongoing reconstruction work along A-line and the approval of the Governor has been fully conveyed to Abia State Internal Service (AIRS) while the ministry of trade is working with Ariaria market executives to complete the verification and issuance of relevant documents to affected traders from next week’, it added.

Meanwhile, Government has dismissed the Wednesday protest by some persons at the market as politically motivated, warning to take action against the perpetrators and their sponsors.

‘Security agents have been deployed to the market to protect life and property of traders and workers of the designated developers as well as ensure the immediate arrest, prosecution of the perpetrators and their sponsors no matter how highly placed they are as we will not watch idly while few individuals take the law into their hands.’

This is as the Government also warned those behind the collection of N50,000 from traders with an intention to embark on legal action against the on-going re-modeling of the market.