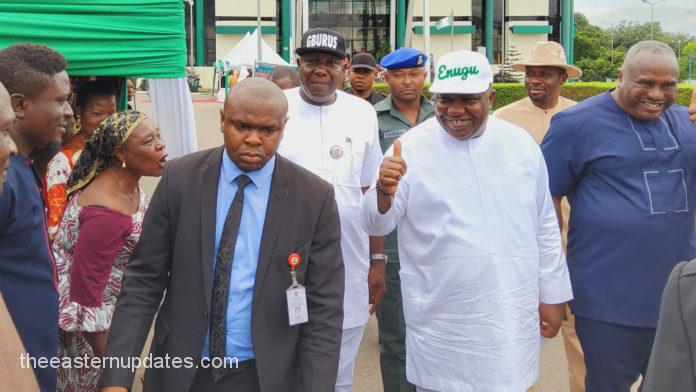 As campaigns for the 2023 general elections in Nigeria commenced yesterday, more communities and groups have continued to declare their solidarity and support for Governor Ifeanyi Ugwuanyi of Enugu State to represent Enugu North Senatorial District in the National Assembly on the platform of the Peoples Democratic Party (PDP).

They have also endorsed PDP and agreed to vote for all candidates of the party at the polls, including the governorship candidate of the state, Peter Mbah, and his running mate, Ifeanyi Ossai.

Prominent among communities and groups were the people of Lejja and Uwani Lejja autonomous communities, Nkpunano Nsukka Ancient Kingdom, Obukpa community and The Face of Hope, among others.

Speaking when the people of Lejja paid a solidarity visit to Ugwuanyi at the Government House, Enugu, the leader of the group, Prof. Damian Opata, told the governor that they are solidly behind his senatorial bid in 2023, and that of other PDP candidates in the state.

Opata, who described Ugwuanyi as a humble and caring leader with a listening ear, said Lejja people are thankful to him that he paid an unscheduled visit, on two occasions, to their community to inspect the long-neglected Lejja-Aku road, and immediately commenced work on it.

Describing Ugwuanyi’s gesture as unprecedented, Opata told him: “The road, which has been in a pitiable condition for many decades, you came and made the difference.

“You have transformed the place; you have directed the immediate commencement of work on that road, and workers are currently working on it.”

Opata, on behalf of the people of Lejja and Uwani Lejja communities, appreciated the governor for appointing their sons and daughters into sensitive government positions.