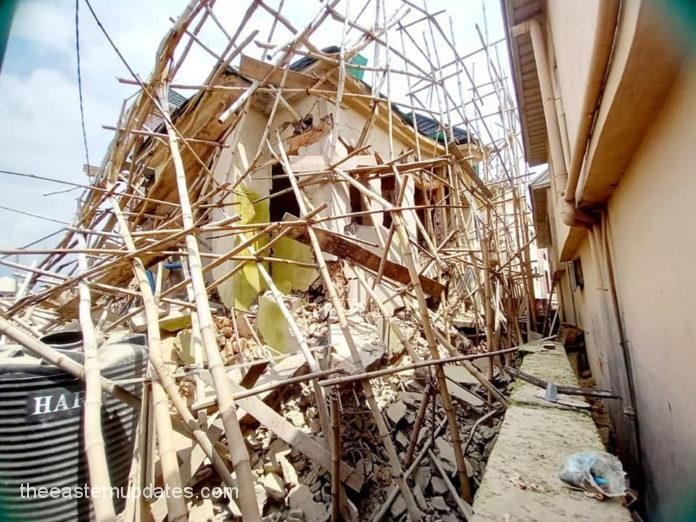 Fresh reports reaching the desk of The Eastern Updates have revealed that two individuals have also been reportedly killed in a building collapse which had occurred in Oraifite, Ekwusigo Local Government Area of Anambra State.

It had also been gathered that the two-storey building, under construction had also caved in when its second floor, which had a serious defect had been undergoing some reconstruction works.

Although, the detail of the incident was still sketchy, but the deceased were said to be construction workers on the site.

According to a source, the incident happened on Friday in Ibolo area of the community.

The source said, “Two persons have lost their lives in a building collapse in Ibolo, Oraifite in Ekwusigo Local Government Area of Anambra State.

“The deceased were working at the two-storey facility when the incident occurred in the early hours of Friday.

“The engineer in charge had instructed the workers to remove the second floor which was not properly constructed. It was in the course of the removal that the building caved in.”

As of the time of filing this report, it was also gathered that one of the victims had been removed from the debris, while the other was still yet to be found.

The State Police Spokesman, DSP Tochukwu Ikenga, could not be reached for reaction as he did not take a call placed across on his telephone line.

In another report, a five-storey building under construction at number 3 Prince Maris Avenue, Mgbabor street in Abakaliki, Ebonyi State on Wednesday collapsed.

The Eastern Updates gathered that the building caved in on Tuesday evening after a heavy downpour earlier in the day.

Our correspondent who visited the construction site Wednesday morning saw another five-storey building under construction beside the debris of the fallen one.

The site is located directly opposite Prince Maris hostel, behind the Presco Campus of Ebonyi State University, Abakaliki.