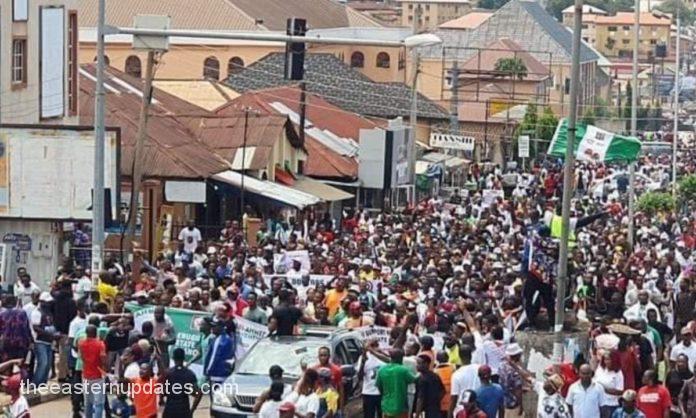 Enugu State on Saturday stood still as thousands of men, women and youths held their ‘Two Million Obidient’ March in support of the presidential candidate of the Labour Party, Peter Obi and his running mate, Senator Yusuf Datti Baba-Ahmed.

The unprecedented crowd who came from different parts of the state took off from Michael Okpara Square in the early hours of the day and paralysed movement on the major roads and streets of the capital city for the greater part of yesterday.

The Eastern Updates reports that people from all works of life joined in the march, including members and supporters of other political parties, just as some residents, who were not part of the initial arrangement abandoned their activities to join the crowd, chanting, ‘Obi is our next president.’

Some of the participants at the peaceful Two Million March who spoke to Sunday Sun expressed joy that the Obidient Movement’s train landed in Enugu, thereby giving them the opportunity to lend their voice to rapidly national crusade for rescue of the country from corruption and misgovernance.

Labour Party candidate for Awgu North State constituency, Mr Nonso Ọchị, said: ‘I am here because I want to be part of the change that is coming to Nigeria and Enugu State soon.

‘If you look at what is happening in Nigeria these days, you will notice that things are growing worse by the day. I have the confidence that with Peter Obi and Datti, Nigeria will get the deserved change. You can see our youths are suffering, unemployment everywhere, teachers cannot get their salaries; our students cannot go to school again. So we have every reason to vote out bad government in Nigeria.

‘Let me tell you the truth I am a state assembly candidate on this Labour Party platform; Obidient is everywhere, both in town and rural areas; Obidient is 100 per cent in Enugu State and we are going to vote PDP out of power here come 2023.’

A participant, For Chukwuma Chime, said his involvement in the Obidient Movement was because of his interest in seeing Nigeria return to glory.