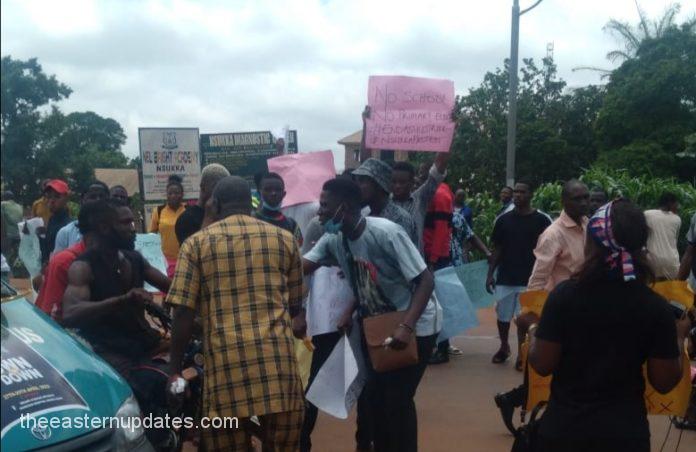 The ongoing feud which has been brewing between Governor Hope Uzodimma of Imo State and his predecessor, Chief Emeka Ihedioha took another turn on Friday as hundreds of people yesterday had trooped out to demand the probe of the former deputy speaker of the House of Representatives under the Ihedioh-Government and others.

The protesters who had come under the aegis of a group described as the Coalition For Justice, Peace And True Democracy had called on the federal government of Nigeria to investigate Ihedioha; his deputy, Chief Gerald Irona; erstwhile secretary to Imo State government, Chief Uche Onyeagucha, and others over what described as alleged acts of sedition against Uzodimma and the state government.

They said, “There are certain issues that give reason for grave concern such as the shameful display on the 28th day of July 2022, where Uche Onyeagocha addressed Emeka Ihedioha as the governor of Imo State at the VIP reception of the Sam Mbakwe cargo airport. We recall the unkind statement made by Gerald Irona, a former House of Representatives member and deputy to the administration of Chief Ihedioha who said they would ‘make Imo ungovernable’ for the APC”.

The demonstrators demanded that Uzodimma be given a peaceful atmosphere to continue to deliver good governance to Imo people, saying “The APC administration in Imo today has cured the deficit in road infrastructure without recourse to federal or local government roads, with 100 roads embarked on and 56 roads completely delivered.” They submitted their petition to the governor which was received by the chief of staff, Barrister Nnamdi Anyaehie.

In his reaction, Ihedioha through his media aide, Chibuike Onyeukwu said it was the sponsored antics of the governor to distract the public from his failures.

Onyeukwu said, “This is one of the sponsored antics by Governor Hope Uzodinma and his cohorts to distract the public from the failures of his regime. Few weeks ago he sponsored the fake news against His Excellency Emeka Ihedioha, alleging that he attacked His Excellency, Peter Obi and the Igbo. This was aimed at pitching Hon Ihedioha against the people. But it failed. We are aware that he has recruited some persons within the PDP to pretend to be running for governor in 2023 but the aim is to fight Hon. Ihedioha ahead of the PDP governorship primaries.

“Senator Uzodinma should leave Ihedioha and the PDP leaders alone and saddle himself with providing solutions to the maladministration and insecurity in the state. Needless to say, Hon. Ihedioha cannot engage or sponsor insecurity under any guise but it is important to state Sen. Uzodinma is disturbed by the solidarity and love, Hon. Ihedioha enjoys from the people of Imo State and unfortunately there’s nothing he can do about it,” he said.

They group had also called on President Muhammadu Buhari to save democracy in Imo State by investigating them in the interest of the state.