Crackdown As 45 Youths Are Busted For Internet Fraud In Enugu 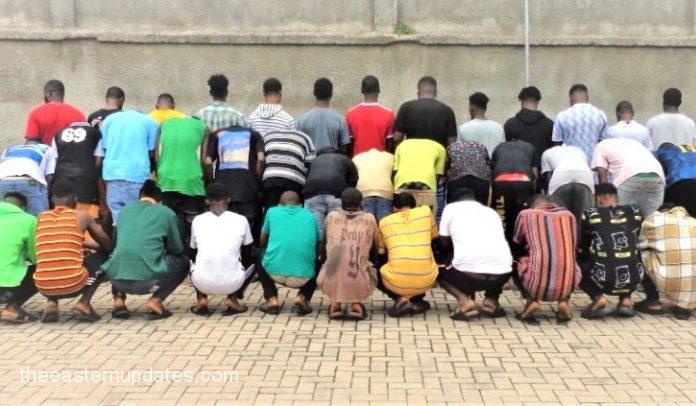 The Economic and Financial Crimes Commission, (EFCC) has announced that it has made a total arrest of up to 45 suspected internet fraudsters from the Trans Ekulu area in Enugu State.

The spokesman Wilson Uwujaren had also given their names in a statement on Tuesday.

Five luxury vehicles, several mobile phones, laptops, among other items were recovered. The suspects will be charged to court as soon as the investigation is completed.

In another report, the Enugu Zonal Command of the Economic and Financial Crimes Commission, EFCC, has secured the conviction of no fewer than 14 internet fraudsters before Justice I.M Buba of the Federal High Court, Enugu on charges bordering on obtaining by false pretences and cybercrime.

The charge against Olisaemeka Goodsuccess Udochukwu reads, “that you , Olisaemeka Goodsuccess Udochukwu sometime in 2022 in Enugu within the jurisdiction of the Honourable Court fraudulently impersonated different identities like Charles Edward Bruceson, Layah Heilperm, Greg Foss, Dylan Leclair, Benjamin Cowen, Spencer Will and Altoini Sherpa from United States of America, through your fake Hangout ,WhatsApp, Messenger and Facebook accounts via your iPhone 7 with intent to defraud unsuspecting foreign nationals and thereby committed an offence contrary to Section 22(2)(b)(i) of the Cybercrimes (Prohibition, Prevention, etc)Act,2015 and punishable under Section 22(2)(b) of the same Act”.