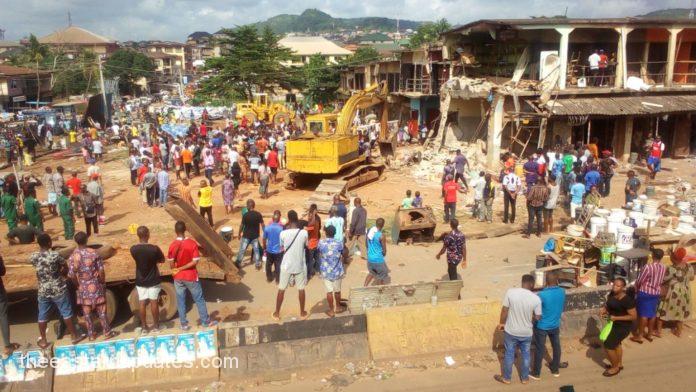 The Ohanaeze Youth Council (OYC) has appealed for calm over the recent demolition of the electrical parts section of Kenyatta Market in Enugu State.

The Eastern Updates gathered that the demolition, executed by Enugu Capital Territory Development Authority (ECTDA), has been generating controversies, with members of opposition parties condemning the state government’s action.

In a statement by its National President Mazi Okwu Nnabuike, the youth wing of the apex Igbo socio-cultural organisation, urged all actors not to politicise the matter.

Okwu, who acknowledged that the process of relocating the market had lingered for years, said the pain of those affected by the demolition was well understood.

He said: ‘We know that these are, indeed, hard times and for that reason, any action such as this is bound to be felt by those affected.’

‘However, our findings show that traders were given over two years to relocate to the new market at Ugwuaji. We also learnt that the relocation process started even before this present government came on board.’

‘Based on this, we appeal to politicians not to politicise the matter; everything must not be seen as an avenue to canvas for votes,’ he said.

The Ohanaeze youths, however, appealed to the state government to look into complain of the affected traders with regards to their difficulty in getting spaces at the Ugwuaji Market.

He added: ‘Some of the traders are complaining that the cost of getting allocation at the new market is too high. So, we are appealing to Governor Ifeanyi Ugwuanyi to look into this and see how traders could be assisted.’

The traders were said to have rebuffed directives by the government to relocate to their permanent site at Ugwuaji area of the state, even when some of their colleagues complied with the directive.

Several traders struggled to remove their goods from the shops, while others were busy loading their goods into waiting trucks during the demolition.