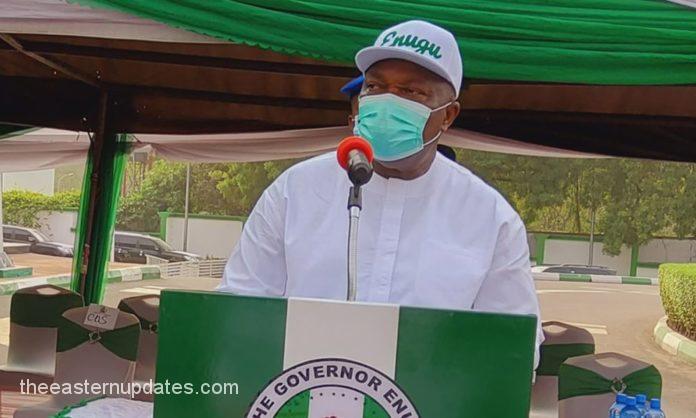 Students of West African subregion under umbrella the of the West Africa Students’ Union (WASU) has honoured Governor Ifeanyi Ugwuanyi of Enugu State with ‘The Chief Custodian of WASU in Nigeria’ award.

While presenting the award to Governor Ugwuanyi at the Government House, Enugu, the President of WASU, Comrade Romans O. Pillah stated that the honour was in recognition of the governor’s commitment to peace and good governance as well as his friendly disposition to education and wellbeing of students “at the national and regional student leadership structure and support for leaders of Enugu State extraction at various echelons including Chidi Ilogebe – immediate past NANS president, and others.”

Pillah expressed delight at the governor’s leadership role in providing the platform for student leaders of Enugu State to excel, stressing that ‘our study has proven that your leadership has benefited the national and regional student leadership structure’.

The WASU president told Governor Ugwuanyi that the award was also ‘in recognition of your tremendous/consistent empowerment of students/youths, community and humanity in general within Nigeria and beyond.’

WASU president, who was accompanied by other leaders of the body, explained that their mission to Enugu State was on invitation to come and hoist the WASU flag in Nigeria, disclosing that the focal office in Nigeria is hosted by the state.

Speaking to newsmen shortly after the event, Pillah said: ‘When we completed the assignment, we moved round and discovered that the governor of this state (Ugwuanyi) has done so much for students and in other areas of societal development.

‘And it was wise for us to come and identify with him so that we take back the message of what he has done in Nigeria as a governor.

‘Having discovered that he is one of the best performing governors in Nigeria in terms of education, promotion of students’ wellbeing and sponsorship, we have bestowed on him the Chief Custodian of WASU because this is our constituency and community.

‘Anyone who does well to our community is worthy of appreciation and we couldn’t do better than bestowing on him (Ugwuanyi) as the Chief Custodian of WASU in Nigeria.’

The student leaders, therefore, called on Governor Ugwuanyi to remain focused and committed to his uncommon leadership style which has entrenched peace and good governance in Enugu State, wishing him success in his endeavours.

Governor Ugwuanyi, who welcomed the WASU leaders to Enugu State, thanked them for the honour and encouraged them to continue to promote peace and regional integration as well as other set objectives of the body geared towards the wellbeing of the students.