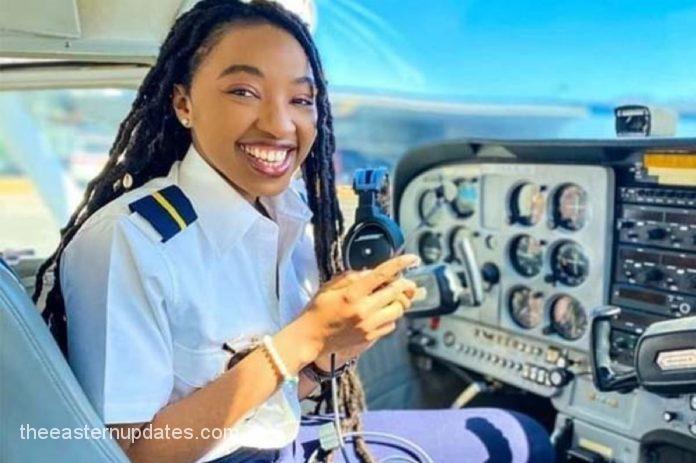 Many Nigerians in the Diaspora have always been doing exploits and making the country proud even with its severely dented image which has continued to rot in the eyes of the Western counterparts. Virtually all fields have at least one Nigerian breaking record in the name of the country and Miracle Izuchukwu is one of those who has made her spectacular mark as the youngest black female United States commercial Pilot.

Miracle Izuchukwu who is a 25 year old professional pilot hailing from Agulu, Anambra State has also recently joined the elite group of 7% of females and 1% of black female Pilots in the world thereby making her exceptional mark in the Aviation industry.

She is also making history as youngest Black female pilot for commercial airlines in USA.

It started with telling her parents that she wanted to be a pilot. At first, her parents didn’t support her dream. They didn’t see it as a possibility. When interviewed she recalled the difficulties she encountered while pursuing her dreams. She noted that the environment didn’t encourage young girls to dream big.

“I grew up in a society that did not encourage young girls to dream big, career-wise. I remember watching lots of TED Talks to give myself more insights on possible careers that might interest me…to no avail,” said Miracle.

In 2019, she had an encounter with an Airline Pilot while working as a customer service rep. He opened her eyes to the possibility of becoming a Pilot. A few weeks later, she went on a discovery flight that sealed it for her.

“I came home that day, called my father, and told him I was considering becoming a Professional Pilot”. She further narrated her father’s remarks thus, “if I get on a plane and see a woman as the Pilot, I would get off the plane”. According to Miracle, words could not explain the pain and confusion she felt because she needed that validation from the father.

Even her mom too was totally against it; her mom is a nurse and wanted her to follow in her footsteps. Her mom felt that to survive in the United States, she needed to be a nurse to put food on the table.

But being a nurse was not her passion. She does not want to be limited to the four walls of the clinic; she wanted to explore her world so she followed her passion. Today, that passion has paid off.