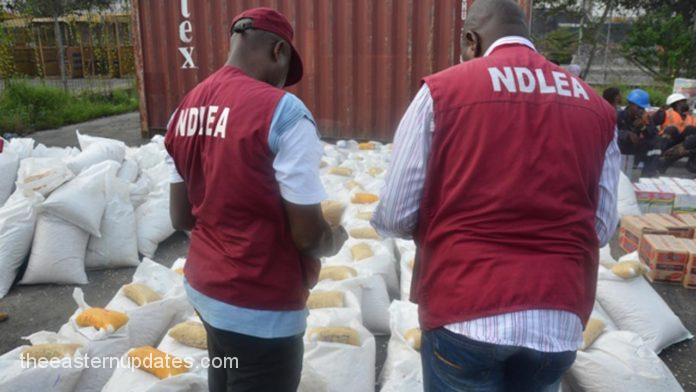 The National Drug Law Enforcement Agency (NDLEA) has announced that they have detained a total number of eight drug peddlers for attempting to import some cocaine pellets into the country and export thousands of some other illicit drugs to the European continent through the international airports in Lagos, Abuja, and Enugu State.

The streaks of arrests and seizures began on Sunday, July 17, when a 52-year-old father of three, Okwo Okechukwu, was arrested upon his arrival from Addis Ababa, Ethiopia, via an Ethiopian airline flight at the Abuja airport for ingesting 76 pellets of cocaine.

During a preliminary interview with the agency, Okechukwu who hails from Enugu Ezike, Igbo Eze Local Government Area, Enugu State, said he was into selling women’s wigs and hair attachments before veering into the drug trade. He has since completed excreting all the 76 wraps of the drug he swallowed while under observation at the agency’s facility in Abuja.

Another father of three, Lawrence Chijioke, 42 years, was arrested at the Abuja airport the same day in an operational synergy between the NDLEA and Nigeria Customs Service at the NAIA. Chijioke, who hails from Umuahia in Umuahia LGA, Abia State was arrested during an inward clearance of an Ethiopian Airline flight from Addis Ababa with 529 pellets of cocaine weighing 11.70kg concealed in his bag. In his statement to the anti-narcotic officers, he claimed he was promised N2 million, which he planned to use to boost his business, upon successful delivery of the cocaine consignment in Abuja.

The NDLEA officials also, on Saturday, July 23, arrested 29-year-old Onuorah Onyinye at the Enugu airport upon arrival on an Ethiopian airline flight from Addis Ababa. A search of her luggage led to the discovery of 2.192 kilograms of cocaine concealed in two feminine designer handbags with false linings.

Attempts by drug traffickers to export different illicit drugs through the NAHCO export shed at the Lagos airport to Europe and the United Arab Emirates were also frustrated by officers and men of the Agency. The officials on Monday July, 18, intercepted some illicit substances concealed in a consolidated cargo going to Dubai, the UAE.

Apart from 24 parcels of Loud, a variant of cannabis, which is largely grown in the United States and Canada, other substances recovered from the cargo include a precursor for methamphetamine, BMK glycidic acid; tablets of designer drug MDMA and another five parcels of cannabis.