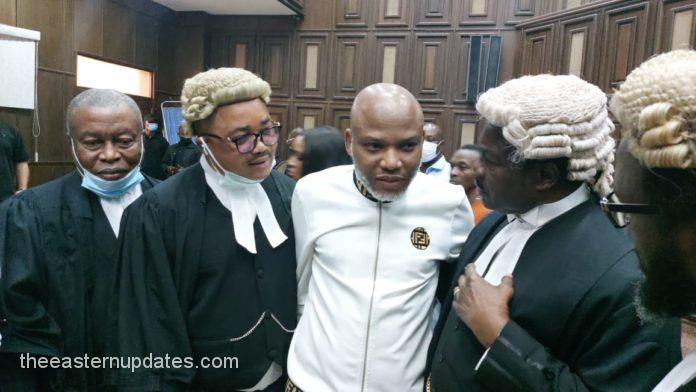 Barrister Ifeanyi Ejiofor, the lawyer to the leader of the embattled leader of the Indigenous People of Biafra (IPOB), Mazi Nnamdi Kanu, has debunked all reports that he is “missing” in the Department of State Services (DSS) facility.

Barrister Ejiofor had made this clear in a statement which he put out on Friday titled, “Important clarification”.

The lawyer had also noted that contrary to reports, particularly an audio clip circulating online that Kanu was missing, the embattled IPOB leader was still in detention.

He said Kanu was in the DSS facility and he visited him (Kanu) on Thursday.

The statement read, “Please UMUCHINEKE, kindly ignore the audio message being mischievously promoted/circulated by the enemies of our people, to the effect that ONYENDU MAZI NNAMDI KANU is missing in the DSS facility.

“The information is fake, a blatant lie, and should be totally ignored by Ezigbo UMUCHINEKE.

“As a matter of fact, court-ordered routine visit was conducted yesterday and ONYENDU spent time with those that visited him.

“Thank you and God bless. Always keep your eyes on the ball.”

IPOB had recently claimed there was an alleged plot to attack its leader at the Kuje Prison by men of the DSS.

In another report, Samuel Ortom who is the Benue State Governor, has called on the Federal Government of Nigeria to release the detained. embattled Indigenous People of Biafra (IPOB) leader, Mazi Nnamdi Kanu for peace to reign in the country.

Governor Ortom had also reiterated that if the peace process in the country could only be taken seriously if Kanu was released from prison.

Ortom said the release of Kanu is a socio-political challenge that must be dealt with politically. He also lamented that even Boko Haram members who posed a greater threat to the country’s unity had often been pardoned, freed and reintegrated into the society.