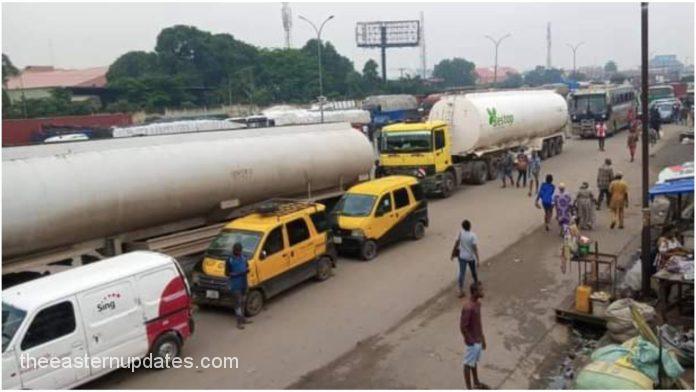 Commuters and motorists were left stranded as a result of a protest by truck drivers plying the Onitsha roads in Anambra State on Tuesday.

The drivers were said to be protesting against the activities of touts.

The Eastern Updates reports that heavy vehicular and non-vehicular movements are always experienced on those axes on Tuesday mornings as a result of the rush, occasioned by the previous day, being the Monday sit-at-home, where vehicles and travellers, especially trucks, stayed off the roads in the south-east.

The Eastern Updates gathered that the activities of the truck drivers led to one accident at the Upper Iweka roundabout in Onitsha, where one person was said to be trapped.

The major roads linking the Upper Iweka roundabout from all fronts, including the Awka Road, Bridge Head to Upper Iweka, Owerri Road, and Ezeiweka Road were all blocked as a result.

An unidentified motorist said, ‘Relevant agencies should help travellers and other road users passing through Onitsha, the situation is very harrowing.’

However, confirming the situation, the Sector Commander, Federal Road Safety Corps, Anambra State, Adeoye Irelewuyi, said the trapped victim had been evacuated alive and taken to the hospital.

‘The trapped victim has been successfully evacuated alive and taken to Boromeo hospital for proper medical attention.

‘However the truck drivers are presently protesting against the activities of touts (agberos) which led to the crash in the first place.

‘FRSC personnel and other agencies are trying to appeal to the protesting truck drivers who blocked the expressway to allow reason to prevail,’ he said.