HomeFeaturesBuhari Should Be Held If Harm Comes To Kanu - IPOB To...
Features 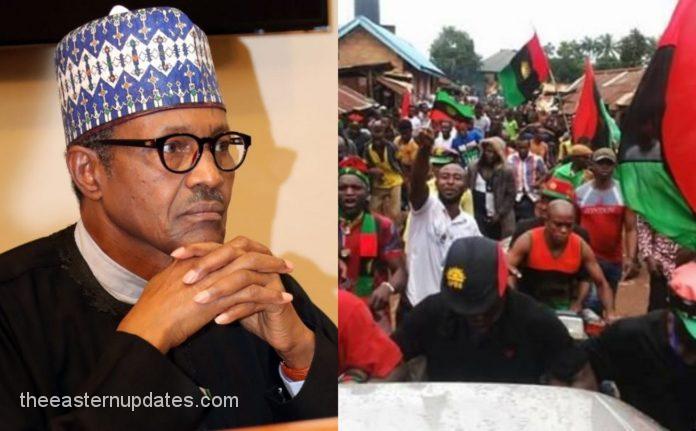 While reacting to the Nnamdi Kanu’s reapperance in court which comes this tuesday, the Indigenous People of Biafra, IPOB, on Sunday have urged the world and the British Prime Minister, Boris Johnson to hold the Nigerian President, Muhammadu Buhari responsible if anything happens to their embattled leader, Mazi Nnamdi Kanu.

IPOB also announced that President Buhari should be held responsible for the torture Kanu is going through in custody of the Department of State Services, DSS.

Kanu has been locked up in DSS custody since June 2021 when he was arrested in Kenya and repatriated to Nigeria. But, Buhari had told Johnson that Kanu may remain in detention because he jumped bail once.

Buhari disclosed this during his interaction with the UK Prime Minister in Kigali, Rwanda.

However, IPOB said Buhari should stop “prevaricating and answer Boris Johnson on why Kanu is still in detention.”

A statement by IPOB spokesman, Emma Powerful, said the Commonwealth meeting in Rwanda had exposed Buhari’s lies against Kanu.

The statement reads: “The attention of the global movement and family of the Indigenous People of Biafra (IPOB) ably led by our great liberator, Nnamdi Okwuchukwu Kanu, has again been drawn to a statement credited to the supposed President of Nigeria, Major General Muhammadu Buhari in Kigali Rwanda.

“The statement of Buhari about the plights and continued detention of Biafra leader, Nnamdi Kanu in Kigali during the Commonwealth meeting going on in Rwanda showed that the world leaders are aware of the pranks of Buhari and his Fulani-controlled Federal Government of Nigeria.

“UK Prime Minister specifically asked Buhari why Kanu is still in detention but because Buhari instead of responding to the question frontally chose to play to the gallery. Is it that he was not aware that his military invaded Mazi Nnamdi Kanu’s Afaraukwu country home on September 14, 2017 or that he deliberately decided to be mischievous?

“It is on record that Nnamdi Kanu did not jump bail but only ran for his dear life. The video evidence of the military invasion of his house which claimed no fewer than 30 lives, only confirmed that Mazi Nnamdi Kanu did what was needful for the moment.

“It is evident that world leaders enjoy making Buhari to advertise his ignorance of obvious realities and current issues.The global community after watching the military invasion of the home of the Biafran leader, where armoured vehicles and helicopter gunships were used against an unarmed leader of the Indigenous People of Biafra clearly understand that Mazi Nnamdi Kanu did not jump bail, instead he escaped for his life.

“The indisputable truth is that if he did not run, by now he would have been a dead man.

“The world is watching and looking for what is still keeping Nnamdi Kanu in DSS custody, but Buhari and his security agencies won’t admit the truth. We are aware that he has been under intense pressure to explain the role of his Government over the illegal abduction and extraordinary rendition from Kenya to Nigeria of a British citizen.

“The Commonwealth meeting in Rwanda exposed Buhari and his Fulani-controlled Federal Government of Nigeria but because he is looking for opportunity to lie against Kanu that is why he chose to lie to the international community and Commonwealth heads of government in Kigali Rwanda.

“The world should hold Buhari accountable for the torture he is being put through and whatever that may happen to our Leader, Mazi Nnamdi Kanu.”