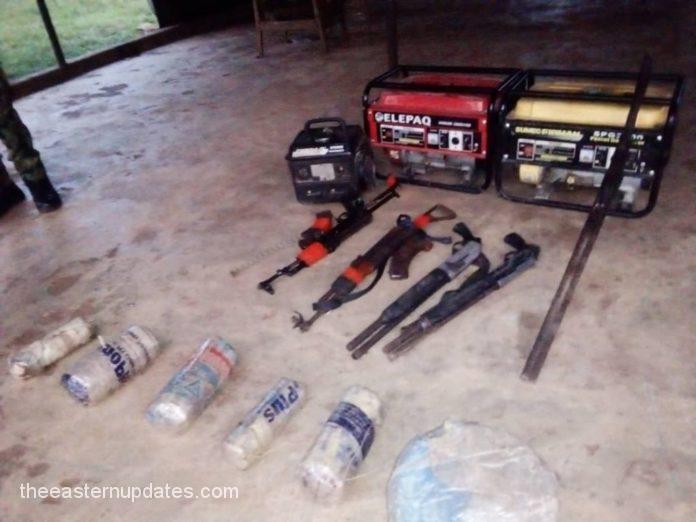 In a new announcement, the Nigerian Army has on Sunday, announced that some joint operatives which comprises of the 302 Regiment, Navy, DSS and police have cleared a camp which has been identified to belong to the Indigenous People of Biafra (IPOB) and Eastern Security Network (ESN) at Idara Nnebo, Ihe Mbosi villages and Ukpor in Nnewi South Local Government Area of Anambra State.

The Director Army Public Relations, Brigadier General Onyema Nwachukwu, in a statement on Sunday, had narrated that the troops recovered two AK-47 rifles, three magazines with five rounds of 7.62 mm (special) ammunition, two pump action rifles and one locally-fabricated gun, three power generators, among others items that were impounded.

In a similar report, some of the troops of 103 Battalion have also conducted a massive raid operation on IPOB/ESN camp at Nkwere Inyi Forest in Oji River Local Government of Enugu State while forcing some of the IPOB criminals to flee in disarray.

It said the troops recovered one Lexus and a Toyota Highlander SUV which was suspected to have been snatched by the criminals.

The statement enjoined members of the public to continue to provide useful and credible information on the activities of the criminal elements in the region.

In another report, Barrister Aloy Ejimakor, who is the Special Counsel to Mazi Nnamdi Kanu, the embattled leader of the Indigenous People of Biafra, IPOB, has blasted the Nigerian President, Muhammadu Buhari over his latest comments against the agitator and the IPOB organisation.

Barrister Ejimakor had also accused President Muhammadu Buhari of lying against Mazi Nnamdi Kanu and IPOB in his latest comments.

He had made notes of the fact that Buhari lied to the world that Kanu jumped bail and that IPOB members vandalized oil pipelines.

In a tweet, the counsel stressed that Buhari’s call that the international communities should designate IPOB as a terrorist organization would not happen.

He wrote: “RIGHT OF REPLY: In the past few days, the President has made IPOB & Nnamdi Kanu his main business, saying that:

“#IPOB blows up pipelines: Not true!

“The world should declare IPOB a terror group: It won’t happen! It’s not!”