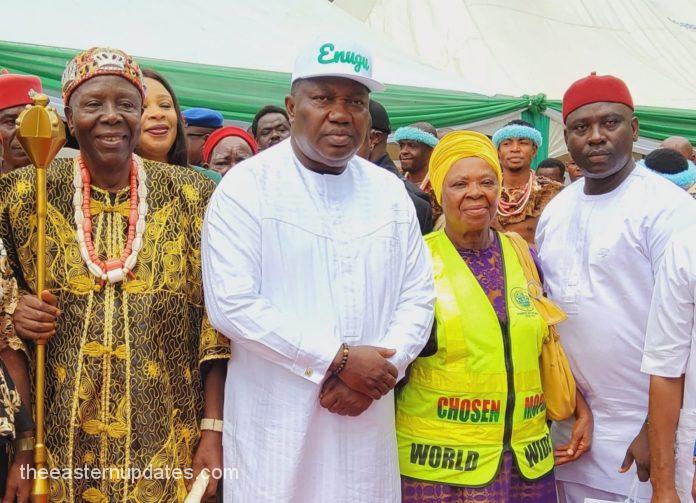 While celebrating some of the new implementations by the Enugu State Government, the people of Imeama-Umuabi Autonomous Community in Udi Local Government Area of Enugu State have on Sunday, paid a Thank-you visit to Governor Ifeanyi Ugwuanyi for restoring some peace in their communities after nearly two decades of crisis and conflicts.

The delegation who were led by the Traditional Ruler of Imeama-Umuabi Autonomous Community, HRH, Igwe Justice F. Ken Ezeike, had also expressed profound appreciation to Gov. Ugwuanyi for salvaging them and bringing peace and succour to them through the creation of the autonomous community.

The Royal Father, therefore, prayed God to bless Gov. Ugwuanyi and bestow him and his family with peace “the way our governor gave us peace”.

Another delegation who have been identified as the people of Awgu Egbeleri Community in Awgu LGA have also visited Governor Ugwuanyi at the Government House, Enugu to thank him for the appointment of their illustrious son, Prof. Aloysius Okolie, as the new Vice-Chancellor of Enugu State University of Science and Technology (ESUT).

The delegation who were led by the Chairman of Awgu LGA, Hon. Pedro Okwudili Nwankwo, who is from Awgu Egbeleri Community, the Chief Whip of the State House of Assembly and Member representing Awgu North Constituency, Hon. Mrs. Jane Eneh, his Awgu South counterpart, Hon. Johnson Chukwuobasi and the Commissioner for Culture and Tourism, Hon. Ugonna Ibe, the jubilant people of the community described the appointment as a well deserved gift to them.

The people of Awgu Egbeleri had equally thanked Gov. Ugwuanyi for his administration’s interventions in their community in terms of development, security, political appointments and elective offices, after being neglected in the past, in spite of their voting population in Awgu LGA.