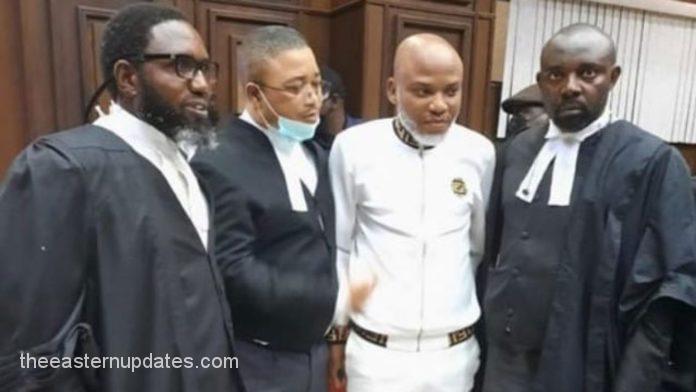 While reacting to the widespread rumours about Nnamdi Kanu’s torture in DSS custody, Barrister Ifeanyi Ejiofor who is the lead counsel of the Indigenous People of Biafra, IPOB, has openly accused the Nigerian President, Muhammadu Buhari of intimidating judges handling his client’s trial ahead of his next court appearance on June 28.

Barister Ejiofor had mentioned that Buhari’s latest remark that Mazi Nnamdi Kanu jumped bail was false and a careless attempt to intimidate the judiciary over his trial.

President Buhari had told the United Kingdom, UK, Prime Minister, Boris Johnson that Kanu jumped bail in Nigeria and would have to answer for all his rants against the Nigerian Government. The President expressed fear that the IPOB leader may repeat the same feat if granted bail again.

During a meeting with the United Kingdom Prime Minister, Boris Johnson, in Rwanda, Buhari had opined that the IPOB leader jumped bail and would do so again if such a privilege was granted to him.

Condemning Buhari’s comment, Ejiofor said the President’s remark was “contemptuous’ and ‘violates’ the democratic tenets of separation of power. Ejiofor said Buhari should be made to answer for contempt of court over his latest comment against the IPOB leader.

A statement signed by Ejiofor reads partly: “My attention has been drawn via calls and messages from foreign colleagues, friends and well-wishers to a profoundly shocking statement credited to the President of the Federal Republic of Nigeria, Major General Muhammadu Buhari, at a bilateral meeting he held with the British Prime Minister, Boris Johnson, on the sidelines of the 26th Commonwealth Heads of Government Meeting at Kigali, Rwanda.

“The statement is careless, mischievous, utterly false in character and content, pedestrian, and confirms once again, the entrenched hatred, odium, and contempt this infinitely divisive and partisan President has for people of the Igbo race.

“While we are now preparing for another Court outing on June 28, 2022, where a crucial Ruling, which will hugely impact on the freedom of Kanu will be delivered, Buhari has made another contemptuous statement, apparently usurping the judicial powers of the Federal High Court by making extra-judicial pronouncement capable of preempting the Ruling of the Court, come June 28, 2022, and consequently, prejudicing the entire proceedings.

“It is our apt observation that Buhari, with greatest respect to his office, stands in grave contempt of the Court Proceedings by this singular declaration, and should be made to appear in Court to answer to this contemptuous statement.

“We wish to use this medium to urge the Foreign Governments and International Communities to pay more attention to the antics of the Buhari-led FGN, who have sworn to violate the principles of separation of powers by intimidating the Judge seized of this case into doing their biddings.”

Kanu had been incarcerated since June last year when he was rearrested in Kenya and repatriated to Nigeria.