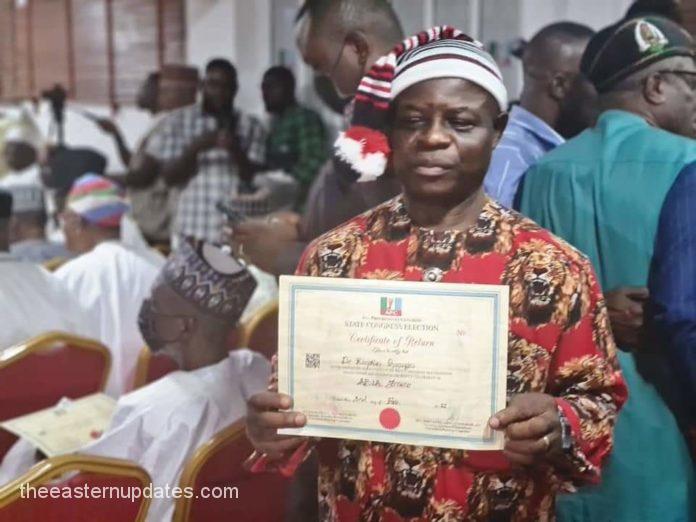 It was jubilation galore in the APC Abia State chapter as some of the Abia State Stakeholders of the All Progressives Congress (APC) in Abia had finally realized the convention of a unification meeting which saw to the collapse of the two factions under the Chairmanship of Dr Kingsley Ononogbu.

The meeting was reported to had taken place on Sunday at the country home of Chief Emeka Atuma, who has been identified as a former member of the House of Representatives, at Ntalakwu in Ikwuano Local Government Area of the state.

In a six-point communique issued at the end of the meeting, the stakeholders resolved that “APC is a one united party” with Onunogbu as the Chairman and Chief Ikechi Emenike as Leader.

The communique at the meeting had clearly stated that they also resolved to “remain under one united Abia APC”, with Emenike as “the only Governorship Candidate for 2023 general elections in Abia”.

The resolution was signed by 15 chieftains of the party, including Emenike, Atuma, Ononogbu, Deputy Chief Whip of the House of Representatives, Rep. Nkiru Onyejeocha, and Spokesman of the house, Rep. Benjamin Kalu.

Others were the former state Chairman of the party, Chief Donatus Nwankpa, former Minister of Labour and Productivity, Chief Emeka Wogu, a member of APC National Working Committee, Chief Friday Nwosu, three APC lawmakers in the state, amongst others.

The meeting also set up a 12-member Reconciliation Committee, with Sen. Chris Adighije and Onyejeocha as Chairman and Secretary, respectively.

Emenike, who read out the membership of the committee, said it had the mandate to reconcile every member back into the fold, ahead of the general elections.